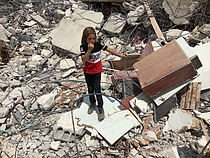 Two Palestinians, including a child, were shot and killed, and three others were injured, by Israeli forces in two separate incidents in the West Bank. 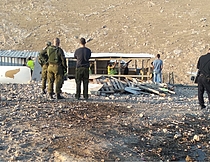 On 7 August, a 23-year-old Palestinian woman was shot and killed at her home during clashes between Palestinians and Israeli forces in Jenin City. The clashes occurred during a search and arrest operation, during which Palestinian youths threw stones and home-made explosives at Israeli forces, which responded by shooting tear gas canisters. The woman was hit by a live bullet while closing the window of her home, reportedly to prevent the entry of tear gas. The ambulance that evacuated the woman to the hospital was also hit by live bullets. Palestinian sources attributed the fatal shooting to Israeli forces. According to the Israeli military, as cited by the media, the Israeli force involved in the incident did not use live ammunition. The clashes ended without injuries or arrests.

The overall number of COVID-19 cases rises by almost forty per cent and 32 more people die. The number of active cases remains stable at around 8,000. The Rafah Crossing between Gaza and Egypt re-opened for the first time since mid-May.

End of Palestinian Authority coordination with Israel in response to annexation threat: decision already impacting medical referrals. Waste Away: Living next to a dumpsite. Unprotected: settler attacks against Palestinians on the rise amidst the outbreak of COVID-19

Twenty Palestinians were injured by Israeli forces in various clashes across the West Bank. This is around 80 per cent below the average of such injuries since the beginning of 2020. Fourteen of the injuries were sustained during clashes that erupted in two separate protests against the establishment of two settlement outposts in the vicinity ‘Asira ash Shamaliya and Beita villages (both in Nablus); the outposts were subsequently dismantled by the Israeli authorities. The other six Palestinians, including a child, were injured during clashes triggered by search and arrest operations in the refugee camps of Balata (Nablus), Al Jalazun (Ramallah) and Jenin, and in Tulkarm city.

The number of active cases with COVID-19 in the West Bank increased by over 20 per cent, and 34 more people have died. The number of recovered cases surges by almost 400 per cent. First new cases of COVID-19 reported in Gaza in over a month. 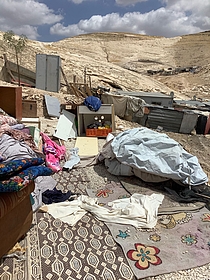 On 9 July, Israeli forces shot and killed a 33-year-old Palestinian man, and injured another, next to the West Bank village of Kifl Haris (Salfit). Israeli official sources said that the soldiers opened fire at two Palestinians seen throwing a Molotov cocktail at a military post, one of whom was injured, while the other fled. The former was later on evacuated by a Palestinian ambulance. Palestinian sources said that the man killed was a bystander. The Israeli authorities opened an investigation. This brings to 17 the number of Palestinians killed by Israeli forces in the West Bank since the start of 2020. Another Palestinian man was shot and injured by Israeli forces during clashes that erupted after the funeral. A gate at the main entrance to Kifl Haris, which was closed the day prior to the incident, remained closed until 12 July, disrupting the movement of over 4,300 residents.

100 structures demolished or seized in June, the highest level since January 2017. Of the targeted structures, ten were humanitarian aid, including a tent used as a quarantine site. Only six out of 700 housing units announced for Palestinians in Area C were issued permits. 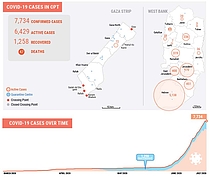 The number of people with COVID-19 in the West Bank continues to surge, with the epicenter Hebron accounting for over 70 per cent of all active cases. 30 more people died in the West Bank which has been placed under a complete lockdown. No new cases of COVID-19 reported in Gaza, which now records only eight active cases.