The Barrier Gate and Permit Regime Four Years on: Humanitarian Impact in the Northern West Bank 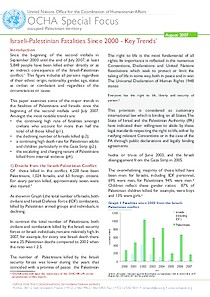 Since September 2000, 5,848 people have been killed in the conflict - 4,228 have been Palestinians, 1024 were Israelis and 63 were foreigners. This report analyses the key trends of these fatalities. In particular: the high proportion of civilians killed; the sharp decline in Israeli deaths and continuing high rate of Palestinians killed; the high proportion of child fatalities and the sharp rise in deaths from internal Palestinian violence.

Three Years Later: The Humanitarian Impact of the Barrier Since the International Court of Justice Opinion

Three years ago (9 July 2004), the International Court of Justice (ICJ) issued an advisory opinion stating that the route of Israel’s Barrier in the West Bank, and its associated regime of permits and restrictions, constitute a serious breach of international law. In this special focus, OCHA looks at several communities of the northern West Bank, severed by the Barrier from their neighbouring communities, from agricultural lands and livelihoods.

Special Focus | Power Capacity in the Gaza Strip | May 2007 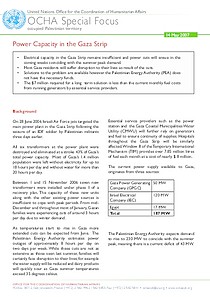 Electrical capacity in the Gaza Strip remains insufficient and power cuts will ensue in the coming weeks coinciding with the summer peak demand. Solutions are available however the Palestinian Energy Authority does not have the necessary funds.

A Year of Decline: The Financial and Institutional Status of The Palestinian Authority 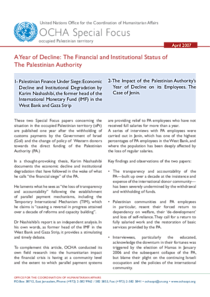 1. Palestinian Finance Under Siege: Economic Decline and Institutional Degradation by Karim Nashashibi, the former head of the International Monetary Fund (IMF) in the West Bank and Gaza Strip 2. The Impact of the Palestinian Authority’s Year of Decline on its Employees. The Case of Jeninץ 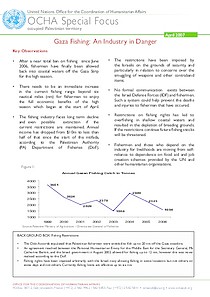 After a near total ban on fishing since June 2006, fishermen have finally been allowed back into coastal waters off the Gaza Strip for the high season. 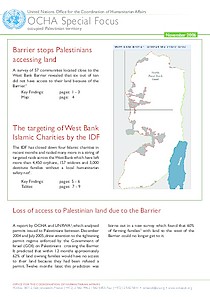 This Special focus contains Two reports. The first part focuses on the access to farming land a and the barrier. The other part, on the Israeli targeting and raids on Islamic Charities.