A nearly 60 per cent increase in active cases in Gaza; significant decline in the West Bank. About 250,000 Palestinians have been vaccinated, (excluding East Jerusalem), with 170,000 receiving both doses.  Health partners are requesting an additional $36 million to respond to increased COVID-19 needs. 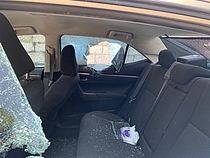 At least 166 Palestinians and 20 Israelis, including civilians and police officers, were injured in multiple violent incidents across Jerusalem city. In daily clashes, Palestinians threw stones and bottles, and Israeli forces shot tear gas canisters, sound grenades and rubber bullets. Violence was particularly intense on 22 April, after Israeli civilians marched to Damascus Gate of the Old City, chanting anti-Arab slogans and clashed with Palestinians before both groups were dispersed by Israeli forces. Scattered attacks by Palestinians and by Israeli civilians included physical assault, stone-throwing and setting cars on fire.

The targeting of donor-funded aid more than doubled in the first quarter of 2021, compared with the monthly average in 2020. Jordan Valley community at risk of mass-demolition after 29 humanitarian aid structures were handed demolition orders. Re-activation of demolition orders in Al Bustan area of Silwan (East Jerusalem), raises risk of mass displacement.

On 6 April, Israeli forces shot at a car, killing the 45-year-old Palestinian driver and injuring his wife at a checkpoint in Bir Nabala (Jerusalem). According to the Israeli authorities, after halting, the car accelerated suddenly in an apparent attempt to run over soldiers. According to the injured woman, her husband was following a soldier’s instructions to proceed. The checkpoint where the incident took place had been set up as part of a search-and-arrest operation.

In March, active cases in the oPt rise by nearly half; active cases in Gaza more than triple. Significant rise in patients in intensive care units and in those requiring mechanical ventilation. The Palestinian authorities vaccinated over 70,000 people by end of March, including 8,000 with both doses. 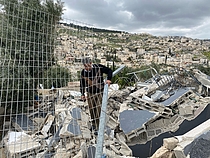 On 19 March a 45-year-old Palestinian man who was throwing stones at Israeli forces, during a weekly protest near Beit Dajan village (Nablus), was shot and killed with live ammunition.

On 7 March, an explosion occurred in a Palestinian boat off the coast of Khan Younis, in Gaza, resulting in the death of three fishermen, two brothers and a cousin. The cause was initially attributed to the misfiring of a test rocket by Palestinian armed groups, who denied the claim. Following an investigation, the Interior Ministry in Gaza suggested that the fishermen had hauled up an Israeli drone in their nets, which had fallen into the sea and contained explosives. The Israeli authorities have denied any involvement in the incident.

In February, active cases more than double in the West Bank, decline significantly in Gaza. Public health restrictions ended in Gaza but extended in the West Bank. The Palestinian Ministry of Health launches its vaccination campaign. 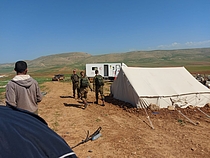 Seventeen Palestinians and five Israeli Border Police officers were injured in the West Bank. Among the Palestinians, a 16-year-old boy was shot by Israeli forces with live ammunition, reportedly while walking near the Barrier in Saffa village (Ramallah). Seven others were wounded in protests against the establishment of a settlement outpost on Beit Dajan land (Nablus) and against settlement expansion in Kafr Qaddum (Qalqiliya). Two Palestinians were injured in clashes that erupted during two search-and-arrest operations in Ad Duheisha refugee camp (Bethlehem) and Abu Shukheidim village (Ramallah).