In November, 60 Palestinian-owned structures were demolished or seized by the Israeli authorities in Area C and East Jerusalem, displacing 35 people and otherwise affecting over 670 others. This is the highest number of structures targeted in a single month in almost two years (last higher figure in January 2017). All the demolitions and seizures were carried out on grounds of lack of Israeli-issued building permits, which are almost impossible to obtain. 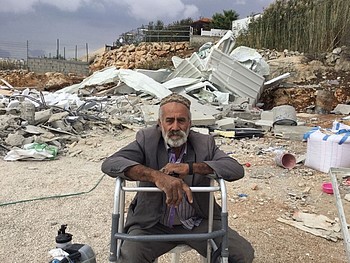 This month’s increase was driven by demolitions in East Jerusalem, where 34 structures were targeted. The largest incident took place on 21 November in the Shu’fat refugee camp, where the Jerusalem Municipality demolished 16 shops and three fuel stations, affecting the livelihood of 30 families. The demolitions were reportedly carried out in order to upgrade a main road between the camp and Anata village. Another two structures (animal barracks), funded by the EU and its Member States in response to a previous demolition, were demolished by the Israeli Ministry of Interior in the outskirts of Qalandiya village. Both areas are located within the Jerusalem municipal boundaries, on the ‘West Bank side’ of the Barrier, where the municipality has largely refrained from providing infrastructure or services. However, since the start of 2018, demolitions in such areas have been on the rise, accounting for 37 per cent of all structures targeted in East Jerusalem, compared to 19 per cent in 2017, 12 per cent in 2016, and 1 per cent in 2015.

Albeit to a lesser extent, demolitions in Area C also increased during November compared to the monthly average in the previous ten months (26 vs. 21 structures). In the herding community of Al Hadidiya in the northern Jordan Valley, Israeli forces dismantled and seized eight structures (barracks and tents), of which five were funded by the EU and its Members States, all provided in response to a previous demolition in October. In the nearby herding community of Ibziq, the authorities seized a tent used as a classroom, which was provided by the Palestinian Authority following the previous month’s demolition of two EU funded structures used by the local school. In Dhaher el Malih (Jenin), another Area C herding community located in the closed area between the West Bank Barrier and the Green Line, Israeli forces removed a fence surrounding a graveyard, claiming lack of a building permit.