West Bank demolitions and displacement | May 2018

In May, the Israeli authorities demolished or seized 34 Palestinian-owned structures across the West Bank, almost the same as the monthly average of targeted structures in the first four months of 2018 and in 2017. A total of 43 people were displaced, the highest such monthly figure so far this year. All the May incidents occurred in the first half of the month, before the beginning of the month of  Ramadan, when demolitions are usually reduced or halted. 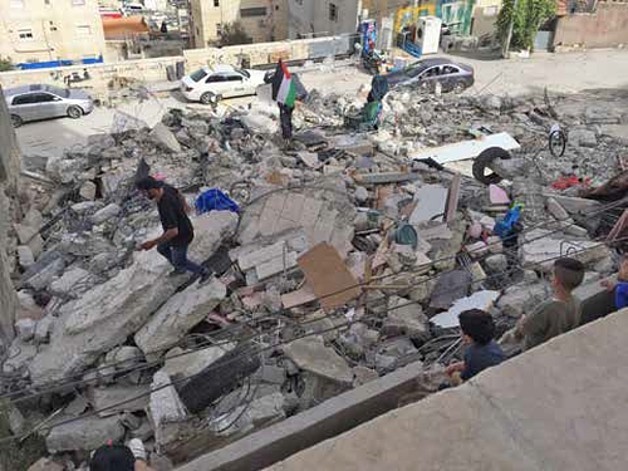 Over 60 per cent of the affected structures this month, including 11 funded by EU and its Member States, were demolished or seized in one day (2 May) in four Area C communities in the Massafer Yatta area of the Hebron governorate. These included six homes, eight livelihood structures, four solar systems and three water systems. These four communities, along with another eight (total 1,300 people), are located in an area designated by Israel as a “firing zone” for military training, and are at heightened risk of forcible transfer due to the coercive environment imposed on them. In late 2017 and early 2018, the residents were affected by additional movement restrictions and repeated military exercises, impeding their access to services and livelihoods.

In the Salfit governorate, the authorities demolished a donor-funded recently-paved road, that connected Haris village to a main road leading to the northern West Bank, affecting over 3,800 residents.

Another six structures funded by EU and its Member States in three Area C communities, including four residences, a health clinic and a primary school, were served in May with stop-work orders (SWOs).

On 24 May, the Israeli Supreme Court issued a final ruling on the longstanding case of Khan Al Ahmar – Abu Al Helu, a Palestinian Bedouin community in Area C, in the outskirts of East Jerusalem. The ruling paves the way for the demolition of all the structures in the community and the forcible transfer of its residents. At least 36 structures, including a primary school serving surrounding Bedouin communities, worth some EUR 315,000, were provided as humanitarian assistance by the EU and its Member States. The community is one of 18 located in, or next to, an area designated in part for the strategic E1 settlement plan. On 30 May, the Israeli authorities approved a planning scheme providing for the construction of 92 new housing units in the Kfar Adummim settlement, immediately adjacent to Khan al Ahmar. This settlement had petitioned the High Court for the implementation of the outstanding demolition orders against the Palestinian community.

Also of concern, on 17 April, the Israeli military issued an order, allowing the demolition of unlicensed structures that are deemed “new” – established within six months, or inhabited for less than 30 days – within 96 hours of the issuance of a removal order. The new procedure, which will enter into force on 16 June, will significantly curtail Palestinian owners’ legal option to prevent demolition of their property in Israeli court.