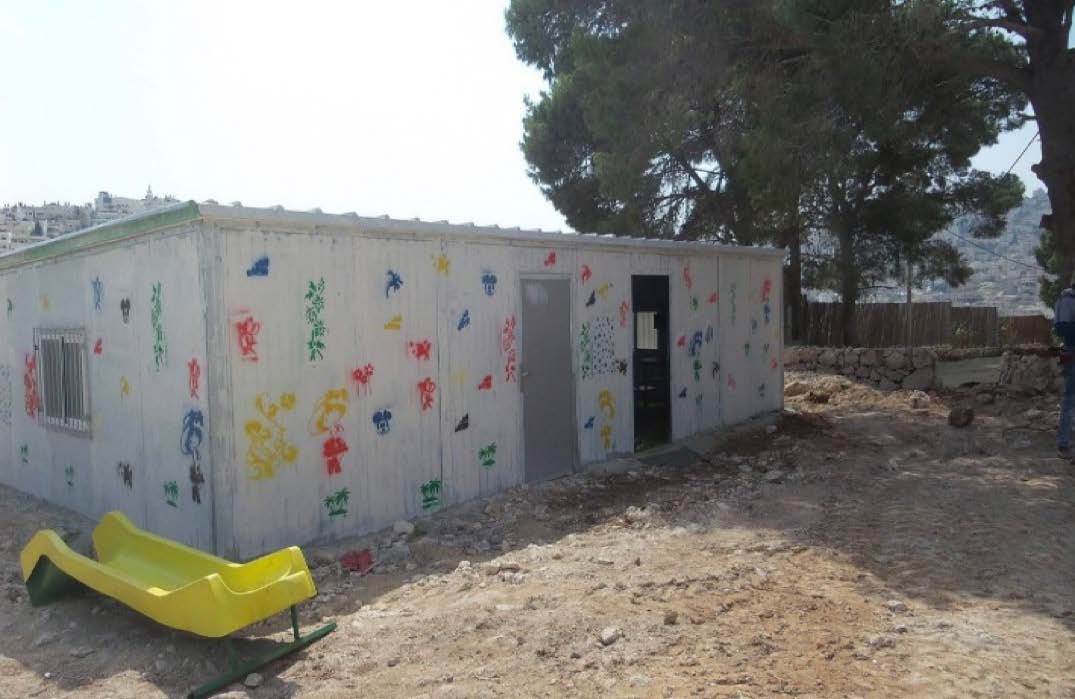 In Area C, the number of structures demolished or seized in April increased by nearly 40 per cent compared to the monthly average in the first three months of 2018. A total of 13 communities have been affected, with 32 of the structures targeted on grounds of lack of permit and three in the context of road building.

In one of the incidents, on 9 April, the Israeli authorities dismantled and seized a school consisting of four classrooms in Khirbet Zanouta village, in the Hebron governorate. The school furniture, as well as two mobile latrines and three water tanks were also seized. Four tents that were erected in the aftermath of the incident to temporarily replace the classrooms were demolished on 15 April. The school was run by the Palestinian Authority and served 24 girls and boys from kindergarten to the 6th grade. In past years, the Israeli authorities had pursued the demolition of the entire village citing the need to preserve a nearby archaeological site.

Also this month, in the Palestinian Bedouin community of Jabal al Baba, in the Jerusalem governorate, the residents were forced to dismantle a caravan, following a seizure warning given by the Israeli authorities. The caravan was installed a few weeks earlier with donor funding, and served partly as a kindergarten and partly as a women’s center and (once a week) as a clinic.

On 25 April, the Israeli High Court of Justice (HCJ) held a hearing regarding the fate of another Bedouin community in the same area, Khan al Ahmar Abu al Helu. During the session, the authorities restated their intention to relocate the entire community to a nearby site (Al Jabal west), while the Court suggested that it will not rule against such relocation, despite the objection of the residents; a final ruling is expected in the near future. The community includes a primary school also serving the residents of four nearby Bedouin communities. There are at least 45 schools in the West Bank (37 in Area C and 8 in East Jerusalem) at risk of partial/total demolition.

Both Bedouin communities, along with 16 others, are located within or next to a strategic area planned for the expansion of the Ma’ale Adumim settlement (the E1 plan). Without the genuine and informed consent of the residents, which is nearly impossible to obtain in the present coercive environment, their relocation may amount to forcible transfer, a grave breach of the Fourth Geneva Convention.

Contrary to Area C, demolitions in East Jerusalem during April (3 structures) declined by 83 per cent compared to the monthly average in the first three months of 2018 (18), and did not include any inhabited home. This is the lowest such figure recorded in East Jerusalem since June 2017. One of the targeted structures was a donor-funded playground serving 80 children in Kufr ‘Aqab, one of the municipal areas separated from the rest of the city by the Barrier; such areas have been nearly abandoned by the municipality and suffer from serious gaps in the provision of services.
So far in 2018, 15 donated structures for over 25,700 euro have been demolished/seized, constituting around 20 per cent of those demolished/seized in the equivalent period of 2017.
Another two structures were demolished this month in two Palestinian localities in Areas A and B, one on punitive grounds, targeting the family home of the perpetrator of an attack during which an Israeli settler was killed in January, and the other during a search operation.