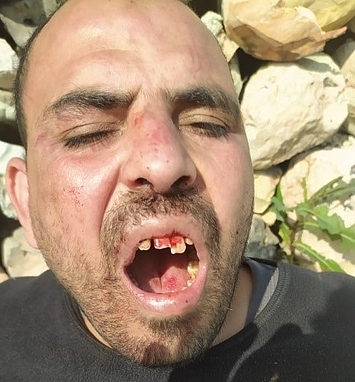 “The doctor that checked me at the hospital in Ramallah told me that a nerve in my arm was harmed as a result of the beating and that I need a surgery”, Issa continued, “but due to coronavirus lockdown, surgeries were suspended […] Because we had physical contact with the settlers, my brother and I were sent by the hospital staff to a quarantine center for five days, and then for another ten days of quarantine at home .”

In the first five months of 2020, OCHA documented 143 attacks attributed to Israeli settlers, resulting in Palestinian injuries (38 incidents) or in damage to Palestinian property (105 incidents).[1] These incidents led to the injury of 63 Palestinians, including 13 children, and damage to over 3,700 trees and saplings, various field crops, and more than 100 vehicles, among other assets.

Around 55 per cent of all incidents during this period (79 out of 143) were recorded during March and April, coinciding with the outbreak of COVID-19. This has exacerbated the hardship of already vulnerable communities, which have been affected by access restrictions and physical distancing measures imposed by the Palestinian and Israeli authorities to contain the pandemic. 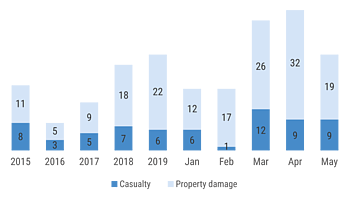 During the same period, an Israeli NGO reported 212 incidents in which, Palestinians threw stones (90 per cent) or Molotov cocktails and other bottles (10 per cent) at Israeli-plated vehicles travelling on West Bank roads, which resulted in the light injury of 21 Israelis and in damage to over 200 vehicles.[2] The bulk of the Palestinian attacks (118) occurred during January and February, with a decline observed in between March and May.

A settlement outpost established some two years ago as a cow farm to the east of the Halamish settlement (Ramallah) has been one of the hotspots during the first five months of 2020. Residents of three Palestinian villages in its vicinity (Jibya, Kobar and Umm Safa) reported that this settlement has become the source of systematic intimidation and violence, which have increased over the past year.

In addition to the incident affecting the Qattash brothers next to Jibya, on 7 April, three armed settlers, reportedly residing in this settlement, physically assaulted and injured two Palestinian siblings from Kobar village, while they were ploughing their land. Subsequently, they handcuffed the two Palestinians and forcibly took them to the settlement, where they were kept for a few hours until soldiers arrived and released them. 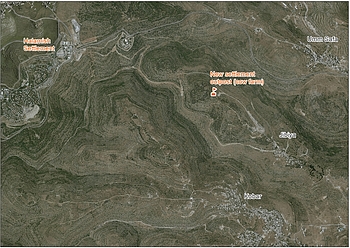 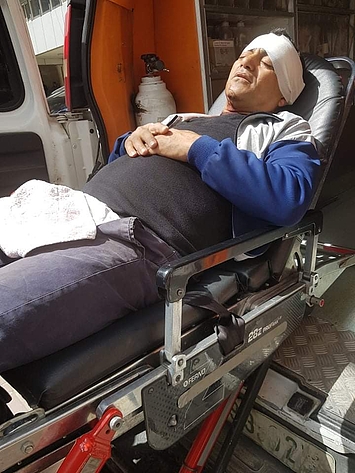 “On 24 March I was at home when a neighbour called to say that the settlers were grazing their cows on my land. I rushed there to protect my olive trees and found myself surrounded by four settlers. One of them hit me on my head and back with an axe and I lost consciousness. The attack caused a fracture in my skull. I would have died if it weren’t for the people from the village who arrived quickly and called the ambulance. Although the doctors at the hospital did not agree to release me, I left the hospital after four days because I was afraid of the Corona virus…. Now is the ploughing season but no one dares to work their land near the settlement.”

In terms of damage to agricultural property, the most impactful incidents were recorded in the Gush Etzion settlement area, west of Bethlehem, and near the ‘Adei ‘Ad settlement outpost, northeast of Ramallah: over 60 per cent of the 3,700 trees vandalized between January and May were located in these two areas. Farmers from Al Khadr village were the most affected in the former area, while residents of Al Mughayir and Turmus’ayya villages bear the brunt in the latter. Although the ‘Adei ‘Ad settlement was established without Israeli official authorization, partly on privately-owned Palestinian land, it is being currently ‘regularized’ by the authorities.[3]

The settlement area of Hebron city, where some 7,000 Palestinians are affected by longstanding movement restrictions (unrelated to the pandemic), has been an additional hotspot, accounting for 18 of the attacks recorded during January-May 2020. These incidents continued the high frequency of settler attacks recorded since the beginning of 2019, following the departure of the Temporary International Presence in Hebron (TIPH).[4]

Other hotspots included Yitzhar settlement and its surrounding outposts in Nablus, where 12 incidents were recorded affecting people from five villages;[5] Homesh settlement (also in Nablus), which was evacuated in 2005 and repopulated in recent years, and was the origin of seven attacks against residents of Burqa village; and the Havat Ma’on settlement outpost located in south  Hebron, where six incidents were recorded affecting residents of Tuwani village.

A climate of impunity

The establishment of settlements in the oPt, in contravention of international law, has been a key source of vulnerability for Palestinians: it has deprived them of their property and sources of livelihood; led to imposition of access restrictions; and generated a range of protection threats, including violent attacks, as those described in this article.

The latter phenomenon has been compounded by the longstanding gaps in the Israeli authorities’ enforcement of the rule of law on violent settlers, which, as indicated by the UN Secretary General, have generated a “climate of impunity”.[6]

In a report issued in 2019, the Israeli Ministry of Justice (MoJ) noted that “in recent years, Israeli authorities made considerable efforts to enhance law enforcement in the West Bank, which have led to a significant decrease in ideologically-based offences […]”[7]

Despite these efforts, which included “the establishment of designated taskforces, increased allocation of funds, and the addition of professional manpower”,[8] OCHA’s monitoring indicate that settler violence has been consistently on the rise since 2016 (see above chart).

Additionally, according to the MoJ’s report, between January 2017 and July 2019, the “Samaria and Judea District” of the Israeli police, which is responsible of investigating offences committed by Israeli settlers against Palestinians in the West Bank (excluding East Jerusalem), opened a total of 118 investigations related to such offences: 69 were closed on various grounds, 38 were still open, and only 11 were concluded with the indictment of suspects.[9]

As reported by the Israeli human rights organization Yesh Din, of the 273 Police investigations tracked by the organization, which were opened between 2014 and 2019 and reached a final stage, only 25, or 9 per cent, led to the prosecution of offenders, while the other 248 investigations were closed without indictment. Of the latter, more than 70 per cent were closed on grounds of ‘offender unknown’ or ‘insufficient evidence’, “indicating the police found an offense had been committed, but failed to identify the perpetrators or collect enough evidence to prosecute”. [10]

While due to the different methodologies used, the Yesh Din and MoJ figures are not comparable, both suggest the existence of serious gaps in holding perpetrators of violence against Palestinians accountable.

Moreover, anecdotal evidence has shown that Palestinian victims of settler violence often choose not to file a complaint. This is primarily because the lack of trust in the Israeli justice system, compounded by their reluctance to approach Israeli Police stations, most of which are located within settlements, and fear of negative repercussions. Therefore, it is plausible that the above figures only partially reflect the extent of the lack of accountability.

As the occupying power, Israel has the obligation to protect the Palestinian population in the West Bank from all acts or threats of violence. This requires the Israeli authorities to do more to prevent attacks by Israeli settlers and intervene effectively on real time to stop them. Once attacks have occurred, the authorities must enhance their efforts to ensure that perpetrators are held accountable, including by removing barriers discouraging Palestinians from complaining and improving the effectiveness of investigations.

[1] Settlers attacks that did not result in casualties or property damage are not included in this count.

[2] The information is collected and circulated via social media by ‘Rescuers without Borders’ and is not verified by OCHA.

[3] A petition with the Israeli High Court of Justice filed by Palestinians and an Israeli human rights organizations to halt this process is still pending (HCJ 825/19, Head of Turmusayya Village Council and others vs Minister of Defense and others).

[4] TIPH presence was unilaterally terminated by Israel. It was the only organization documenting incidents and providing a protective presence that was authorized to access any part of the city on foot and by vehicle, and it had direct channels to address urgent incidents and concerns with the relevant authorities. The departure of TIPH has placed increasing pressure on the other organizations providing a protective presence in H2, which forced them to withdraw or to scale back. For further details on the situation in H2 during 2019 see, OCHA, Dignity denied: Life in the settlement area of Hebron city, February 2020.

[6] Report of the Secretary-General, Israeli settlements in the Occupied Palestinian Territory, including East Jerusalem, and the occupied Syrian Golan, 20 September 2019, para. 27.

[7] State of Israel, Ministry of Justice, Israel’s Investigation and Prosecution of Ideologically Motivated Offences Against Palestinians in the West Bank, August 2019, p. 1.