UN report: Occupation is the main cause of humanitarian needs in the occupied Palestinian territory 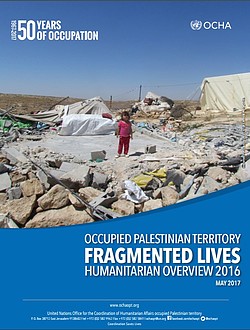 As the 50th anniversary of Israeli occupation approaches, OCHA’s 2016 Annual Report for the occupied Palestinian territory (oPt), released today, underscores that occupation policies and practices remain the key cause of humanitarian needs in the oPt. The internal Palestinian political divide is also a serious contributing factor.

“OCHA’s Annual Report explains why there is a humanitarian programme in the oPt,” said David Carden, Head of OCHA in the oPt. “At its heart, the crisis in the oPt is one of a lack of protection for Palestinian civilians – from violence, from displacement, from restrictions on access to services and livelihoods, and from other rights violations – with a disproportionate impact on the most vulnerable, children in particular. While the trends vary from one year to the next, the pervasive lack of protection and accountability for violations of international law remains.”

The new report observes that, in 2016, Palestinian fatalities from conflict-related violence in the oPt and Israel declined by 37 per cent compared with 2015 (107 vs. 169); the decline in Israeli fatalities was 48 per cent. Palestinian injuries (as opposed to fatalities) declined by about 80 per cent compared with 2015 (3,247 vs 15,477), with the vast majority recorded in the West Bank, including East Jerusalem.

Forced displacement of Palestinians also continued. While there was no new displacement in the Gaza Strip, as the August 2014 ceasefire continued to largely hold, more than 9,000 families (47,200 people) remained displaced at the end of 2016. In the West Bank, more Palestinians were displaced in 2016 (1,601, including 759 children) due to demolitions of their homes by the Israeli authorities than in any year since OCHA began recording the phenomenon in 2009. The vast majority of the 1,094 affected structures were targeted on grounds that they lacked a building permit, which is nearly impossible to obtain from the Israeli authorities. Twenty-nine (29) structures were demolished or sealed on punitive grounds, targeting the family homes of perpetrators of attacks against Israelis, citing the need to deter future attacks. Thousands of others in Area C and East Jerusalem were at risk of displacement and/or forcible transfer, due to a coercive environment generated by Israeli policies and practices, which create pressure on residents to leave their communities.

Restrictions on Palestinian movement and access to basic services and humanitarian assistance also continued throughout the oPt, despite some easing of measures. The number of Palestinians allowed to leave Gaza by the Israeli authorities, which increased after the 2014 hostilities, declined in the second half of 2016, while the volume of produce leaving Gaza has risen significantly. The isolation of Gaza was exacerbated by Egypt’s continued closure of the Rafah crossing, which was opened only for 44 days in 2016, up from 32 in 2015. In the West Bank, as of December 2016, OCHA had recorded 572 movement obstacles overall, and an additional 110 obstacles deployed within the Israeli-controlled area of Hebron city (H2). Palestinian access to land behind the Barrier continued to be channelled through 84 gates, 65 of which opened only during the olive harvest.

In 2016, humanitarian organizations continued to face a range of obstacles to their ability to deliver aid. Israeli restrictions on the entry of national staff of aid organizations to and from Gaza intensified in 2016, with 31 per cent of permit applications to enter or exit Gaza denied, compared with an average of four per cent in 2015. Humanitarian operations in Gaza were also impeded by restrictions imposed by the Hamas authorities, as well as by donor-imposed prohibitions on contact with them, in addition to the continuing closure of the Rafah crossing with Egypt and the ongoing internal Palestinian divide.

“Nearly a decade of blockade, internal divide and recurring conflict, alongside a lack of action to adopt measures that would resolve chronic needs, has left the Gaza Strip especially vulnerable,” warned Mr. Carden.

In the West Bank, the number of incidents obstructing the movement of UN and international organization employees increased compared with 2015 (211 compared to 183), but remains below the figures recorded in previous years. Also in 2016, the Israeli authorities demolished, or seized, 300 donor-funded structures provided as humanitarian assistance to Palestinians. This figure was nearly three times higher than that for 2015, with the value of the assistance destroyed or seized estimated at over US$ 730,000. More than 100 additional aid structures also received demolition, stop-work, and eviction orders, or verbal warnings, placing them at risk.