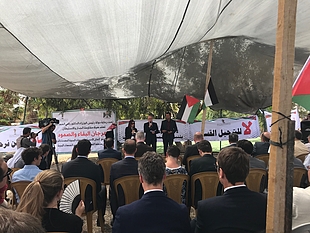 Today, the Humanitarian Coordinator, Mr. Jamie McGoldrick, and the UNRWA Director of Operations in the West Bank, Mr. Scott Anderson, joined Palestinian officials in a visit to the Palestinian Bedouin community of Khan al Ahmar-Abu al Helu, on the outskirts of East Jerusalem in the occupied Palestinian territory.

“We are monitoring the situation in Khan al Ahmar closely and are deeply concerned by what we see here, and in the scores of other vulnerable Bedouin communities,” said Mr. McGoldrick. “We call on the Israeli authorities to respect their legal obligations, as the occupying power, including through stopping the demolition of Palestinian-owned structures and ceasing plans for the relocation of Palestinian Bedouin communities.”

“The entire community of Khan el Ahmar-Abu al Helu, the vast majority of whom are Palestine refugees and who are amongst the most vulnerable Bedouin communities in the West Bank, is facing the risk of demolitions of their structures and relocation,” said Mr. Anderson. “The humanitarian impact of home demolition is severe and long lasting. It is well documented in previous instances that the transfer of Bedouin communities into urban settings is socially and economically non-viable. The Khan al Ahmar-Abu al Helu community has repeatedly called for the provision of suitable planning solutions and services in its current location,” Mr. Anderson also said. 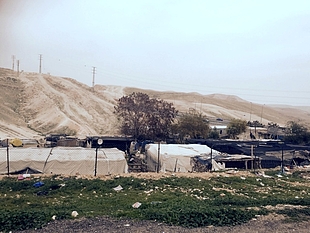 Khan al Ahmar-Abu al Helu is home to 181 people, 53 per cent of whom are children and 95 per cent of whom are Palestine refugees registered with UNRWA. The community is one of the 46 Bedouin communities in the central West Bank that the UN views as at risk of forcible transfer, including due to a coercive environment generated by Israeli practices and policies, including plans to move the communities from their current locations. Eighteen of these communities, including Khan al Ahmar, are located in or next to an area slated in part for the E1 settlement plan, reportedly aimed at creating a continuous built-up area between Ma’ale Adumim settlement and East Jerusalem.

Nearly all of the Khan al Ahmar community’s structures are at risk of demolition by the Israeli authorities, including the school, initially built with donor support. A court session later this month may determine the fate of the structures and the Israeli relocation plan. The school now serves some 170 students from the community and four surrounding ones. For years, the residents have insisted on their right to return to their original lands in what is now southern Israel and, until this occurs, asked for international support to stay in their current location.

International humanitarian law prohibits the individual or mass forcible transfer of the protected population of an occupied territory regardless of the motive. Such transfer constitutes a grave breach of the Fourth Geneva Convention and amounts to a war crime potentially triggering the individual criminal responsibility of officials engaged in it. The UN Secretary-General has stated that “forcible transfer does not necessarily require the use of physical force by authorities, but may be triggered by specific circumstances that leave individuals or communities with no choice but to leave; this is known as a coercive environment” (A/HRC/34/38, March 2017) and called on the Israeli authorities to “(c)ease from taking any initiative to relocate communities in Area C in contravention of international law, including Bedouin and herder communities” (A/72/564, November 2017).

The visit comes in advance of the upcoming Israeli High Court of Justice’s hearing on the case, scheduled for Wednesday, April 25.