On 23 March, the Israeli authorities demolished 53 structures in the community, including 22 homes, leaving 87 Palestinians homeless, nearly half of them children. Many of the demolished structures had been provided by donors as relief after earlier demolitions. This is the third demolition recorded this year in the community, which is located in an Israeli-declared military training area, or “firing zone.” Some 18 per cent of the West Bank has been closed for military purposes since the 1970's although recent research indicates that nearly 80 per cent of such areas are not used for training. The mosque at Khirbet Tana dates from the Ottoman period suggesting that it has been a center for herding communities for many generations. 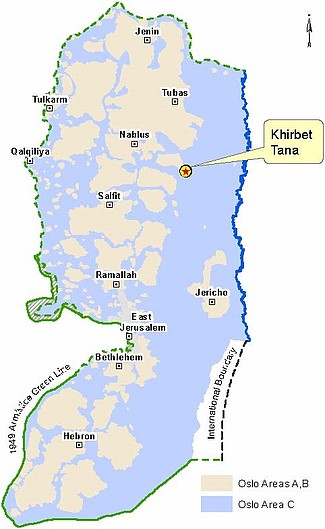 “Palestinian communities like Khirbet Tana are amongst the most vulnerable in the West Bank,” said Mr. Piper. “Communities that find themselves declared a “firing zone” face a high risk of losing their livelihoods, homes and schools.  The destruction of the relief provided to these households in these harsh winter conditions adds insult to injury.”

International humanitarian law prohibits Israel, as an occupying power, from destroying Palestinian private property, unless strictly required for security purposes, which is not evident in this case. Destroying homes and livelihoods in order to place pressure on households to move places communities at risk of 'forcible transfer', a grave breach of the laws of occupation.

“It’s hard to see how demolitions like the ones in Khirbet Tana are about anything other than pushing vulnerable Palestinians out of certain parts of the West Bank” said Mr. Piper. "We cannot watch silently as such fundamental humanitarian principles are violated," he added.