Statement by the Humanitarian Coordinator for the occupied Palestinian territory, Mr. Jamie McGoldrick, on Palestinian casualties in the Gaza Strip

I am deeply saddened by reports that seven Palestinians, including two children, were killed, and hundreds of others injured, by Israeli forces during demonstrations in the Gaza Strip yesterday. This is the highest fatality toll in a single day since 14 May 2018, when 42 Palestinians were killed.

I call on Israeli forces to ensure that their use of force is in line with their obligations under international law. All actors must ensure that children never be the target of violence and neither be put at risk of violence, nor encouraged to participate in violence.

The growing number and expanding nature of demonstrations in the Gaza Strip in recent weeks reflects increasing frustration over worsening conditions of daily life and the continued deprivation of basic human rights, alongside the lack of a political process. I call on Israel, Hamas and all other actors with the ability to influence the situation, to take action now to prevent further deterioration and loss of life. 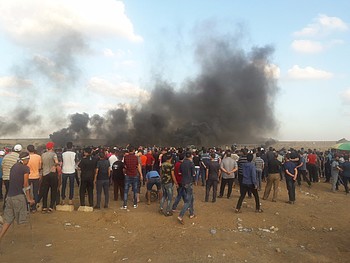 oPt Humanitarian Fund releases US$1 million in funds to avoid collapse of services in the Gaza...

Entry of emergency fuel urgently needed to avoid closure of hospitals and overflow of sewage in...