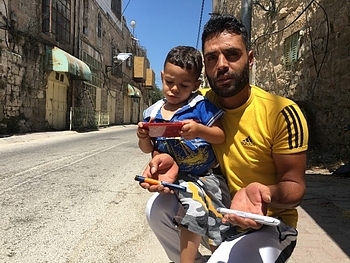 Since early July, Palestinian youths protesting the Israeli government’s plans to annex parts of the West Bank,[1] have been gathering regularly near the checkpoint and throwing stones at Israeli soldiers. The soldiers usually chase the youths into the streets of Bab az Zawieh, where clashes take place for three to five hours each time, away from the checkpoint. Over the course of these confrontations, and often for several hours afterwards, the checkpoint has been closed for Palestinian movement in both directions.

The regular closure of ‘Checkpoint 56’ has exacerbated the isolation and hardship of some 1,000 Palestinians, who reside in the most restricted area of H2, around Ash Shuhada Street. This area has been designated a ‘closed military zone’, where Palestinian access is largely restricted to residents only, and requires passage through a pedestrian-only checkpoint. Within this area there is only one shop, which offers only a few basic food items. Therefore, residents rely on the supermarkets and pharmacies located in the Bab az Zawieh area, on the other side of ‘Checkpoint 56’.

While, in principle, residents can leave the closed area on foot through other checkpoints, these are inaccessible for people with disabilities or have difficulty walking. People using alternative, unapproved exit routes, such as private backyards or rooftops, can be arrested for violating the general closure.

Those who do manage to reach the alternative closest checkpoint located in the Tel Rumeida neighbnorhood, must then take a detour of up to three kilometers to reach the commercial area in Bab az Zawieh, which is located just 100-200 metres from their homes. Some must do this journey on foot, as public transport has halted, due to the pandemic-related lockdown. 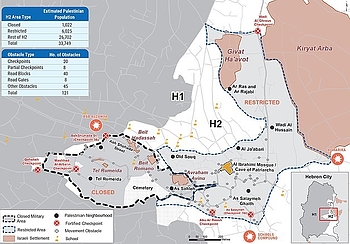 After being turned back at Checkpoint 56, Samer rushed home to get his son. “I thought that if the soldiers actually see Adam, they would understand the situation and allow us to pass… but they yelled at me to go back home! In that moment I realized that our lives mean nothing to them.”.

Samer managed to get his son to the pharmacy through the checkpoint in Tel Rumeida, but while attempting to return home through ‘Checkpoint 56’ the soldiers once again refused him passage. “My wife was waiting behind the checkpoint. I argued for about half an hour, until I convinced one of the soldiers to let my little boy go to his mom. At the end the boy passed, but I had to make the long detour again to reach home.”.

The vulnerability of Palestinians living in the closed area of H2 has increased since May 2020, following the PA’s decision to halt almost all bilateral contacts with Israel, including security coordination, in response to Israel’s annexation plan. Prior to that, residents facing access problems had the option of contacting the Palestinian District Coordination and Liaison Office (DCL), who would intervene on their behalf with the Israeli authorities. In the past, they could also seek help from the Temporary International Presence in Hebron (TIPH), but, following the termination of the organization’s mandate in January 2019, this option is no longer available. At present, residents can contact the Israeli District Coordination Office (DCO) in person, to try and solve access issues. However, many Palestinians prefer to avoid this option, which is considered by many as socially and/or politically unacceptable, and this process is often ineffective.

It is estimated that 33,000 Palestinians reside in the H2 area of Hebron city, alongside some 700 Israeli settlers. Over 20 per cent of these Palestinians, some 7,000, live in access-restricted areas, including 1,000 in the area declared a ‘closed military zone’ in 2015.

In 2020, humanitarian and human rights partners have stepped up their response in H2 through a comprehensive, multi-sectoral action plan targeting 17,500 vulnerable Palestinians. The plan, which has been facilitated by the West Bank ‘Inter-cluster Coordination Group’, includes a package of interventions to be implemented over two years for a total of US$ 7.09 million.[2]

The plan includes activities such as rehabilitation services, first aid training, psychosocial support, legal counselling and monitoring and documentation of violations and conflict related violence. In addition, education activities also include nutrition in schools for children in the first four grades, which complement an ongoing project that focus on improving the nutritional status of school-age girls in first four grades. The Food assistance to the poor will be provided through emergency cash assistance using electronic vouchers, alongside emergency support through agriculture-based interventions.

For years, Palestinian residents of H2 have been subject to a coercive environment, comprising broad access restrictions, alongside violence and intimidation by Israeli settlers and Israeli forces. This has left many with no other choice than to leave their homes, raising concerns of forcible transfer, which is a reach of the Fourth Geneva Convention. A survey conducted in 2015 in the access-restricted areas of H2 found that almost a third of the housing units in the area were empty.[3] The High Commissioner for Human Rights reported that between October 2018 and August 2019, six Palestinian families moved from the Tel Rumeida area of H2, owing to coercive factors. As the occupying power, Israel must protect Palestinian civilians in Hebron city, ensure that their humanitarian needs are met, and that they are able to exercise their human rights, including their right to freedom of movement. Restrictions imposed on the freedom of movement due to security concerns must be strictly limited to the exigencies of the situation and must not involve prohibited discrimination.

[1] The coalition agreement that led to the establishment of the current Israeli government, calls for the annexation of parts of the West Bank to Israel, as early as 1 July, subject to the “full agreement” of the current U.S. administration. According to the map included in the Middle East Peace Plan presented by the US administration in January 2020, H2 is one of the areas to be annexed. The threat of annexation has been widely condemned by the international community and the UN Secretary-General has stated that annexation “would constitute a most serious violation of international law, grievously harm the prospect of a two-State solution and undercut the possibilities of a renewal of negotiations.”

[2] These interventions rely on information collected in the 2018 OCHA Household Survey and are part of the oPt 2020 Humanitarian Response Plan (HRP).

[3] The survey was conducted by the Hebron Rehabilitation Committee, as part of a preservation and revitalization plan. According to its findings, 1,079 of the of 3,369 housing units surveyed in what it defines as ‘Hebron’s Old City’ were found to be empty.