Sharp decline in casualties during demonstrations, as Gaza mourns yesterday’s massive loss of life and struggles to treat injuries

Today, as of 20:00, two Palestinians were reported killed by Israeli forces in Gaza, and 417 injured, according to the Palestinian Ministry of Health (MoH), during demonstrations near the perimeter fence. Although today’s protests were originally announced as the culmination of the ‘Great March of Return’ protests which began on 30 March, there are indications that the demonstrations may continue until 5 June.

Multiple demonstrations also took place today across the West Bank, in commemoration of the ‘Nakba’, some of which evolved into clashes with Israeli forces, mainly at checkpoints. Initial figures indicate that at least 166 Palestinians, including four children, have been injured.

Yesterday, 14 May, recorded the highest casualty toll in the Gaza Strip in a single day since the 2014 hostilities: a total of 60 Palestinians, including eight children, were killed by Israeli forces, some of them in circumstances which are still unclear. Another 2,770 were injured, nearly half by live ammunition.

Today was declared a mourning day in the occupied Palestinian territory (oPt), with life in Gaza largely coming to a halt amidst widespread shock and grief. Around noon time, tens of thousands participated in the funeral processions and visited the mourning families to offer condolences. In the afternoon, several hundred people responded to calls to gather at the five tent camps along the perimeter fence to participate in today’s demonstrations to mark the 70th anniversary of what Palestinians refer to as the 1948 ‘Nakba’, in contrast to an estimated 35,000 people participating yesterday.

Since 30 March, 104 Palestinians, including 12 children, have been killed during the course of the demonstrations, and another 12, including two children, in other circumstances.[1] The cumulative number of injuries has exceeded 12,600, of whom 55 per cent have been hospitalized. One Israeli soldier has been injured.

The large number of casualties among demonstrators, in particular the high percentage injured by live ammunition, has raised concerns about excessive use of force, alongside calls for independent and transparent investigations of these incidents, including by the UN Secretary-General. Following yesterday’s events, the spokesperson for the UN High Commissioner for Human Rights today stated: “The rules on the use of force under international law have been repeated many times but appear to have been ignored again and again. It seems anyone is liable to be shot dead or injured: women, children, press personnel, first responders, bystanders, and at almost any point up to 700m from the fence.”

The Israeli authorities have stated that many of the fatalities, including 24 of those recorded yesterday, were members of Hamas and other armed groups, some of whom were killed while planting or throwing explosive devices.

In today’s briefing to the Security Council, the Special Coordinator for the Middle East Peace Process, Nickolay Mladenov, called yesterday “a day of tragedy” for the people of Gaza. He echoed the concern over excessive use of force by Israeli forces, while adding: “Hamas, which controls Gaza, must not use the protests as cover to attempt to place bombs at the fence and create provocations; its operatives must not hide among the demonstrators and risk the lives of civilians.” 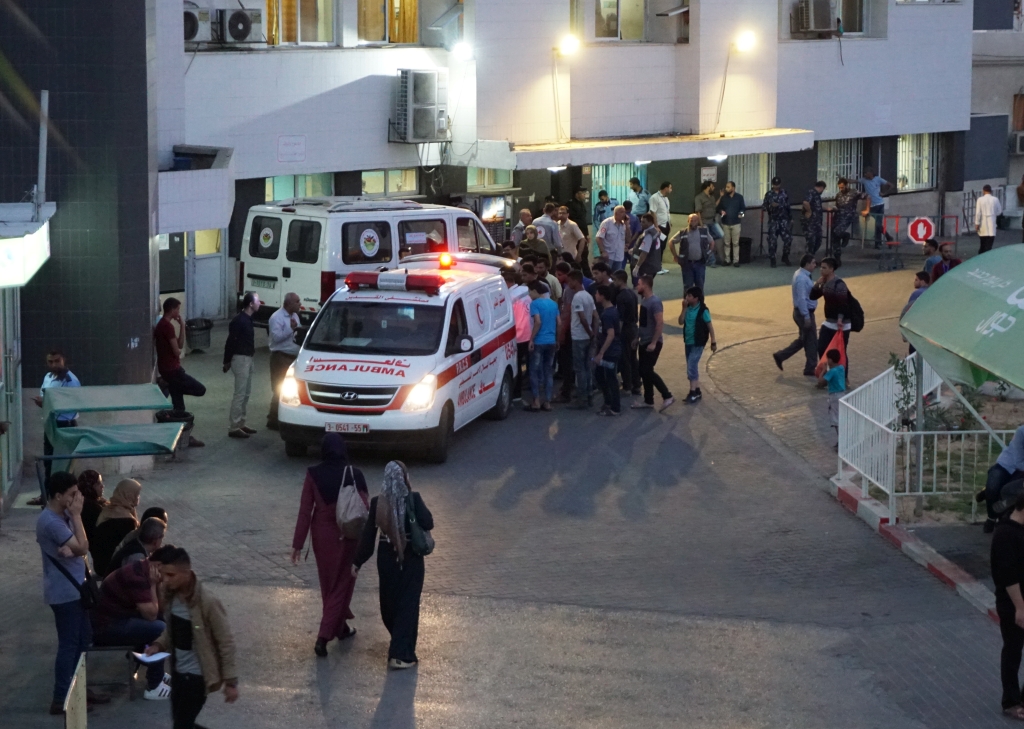 Kerem Shalom, Gaza’s main crossing for the entry and exit of goods, partially re-opened today, allowing the entry of medical supplies, including five truckloads delivered by the MoH in Ramallah, two truckloads by the UN, and, reportedly, two truckloads contributed by Israel. This is despite the extensive damage caused to the Gaza side of the crossing by Palestinians during the protests on 4 and 11 May, and again yesterday. The Israeli authorities have indicated their readiness to increase the volume of palletized goods entering Gaza via Kerem Shalom; however, the damage sustained to the crossing’s pipelines and conveyor belts will continue to impede the import of fuels and raw construction material into Gaza.

Following the damage sustained by the fuel and gas pipelines, the UN was forced to temporarily interrupt the distribution of emergency fuel to 220 critical health, water and sanitation, and solid waste facilities, after exhausting its reserves inside Gaza. Only about one quarter of the 936,000 litres planned for May were distributed. To avoid a collapse of essential services, especially as hospitals are consuming emergency fuel provisions at much higher rates than usual, an alternative arrangement for the entry of fuel for hospitals and other critical facilities is currently being explored by the UN and authorities managing the crossing. Due the shutdown of Gaza’s power plant approximately one month ago, along with the disruption of electricity supply from Egypt, Gaza has been depending almost exclusively on electricity purchased from Israel, allowing for only two to four hours of electricity per day.

The Rafah passenger crossing between Gaza and Egypt is exceptionally open in both directions for six days this week, the longest such opening recorded since 2014. As of 18:00 today the Egyptian authorities have allowed 389 people to leave Gaza, including one patient wounded in demonstrations referred for medical treatment in Egypt, out of 19 patients scheduled to cross today. The Salahadin Gate in Rafah was also opened today, allowing the entry of two trucks carrying fuel.

The Erez passenger crossing with Israel remained closed today, except for urgent humanitarian cases, including five medical doctors from the West Bank allowed to enter Gaza. The crossing is expected to reopen tomorrow for permit holders.

Humanitarian actors have identified three areas of intervention to respond to the urgent needs arising from the ongoing protests in Gaza: providing immediate life-saving healthcare; monitoring, verifying and documenting possible protection violations; and scaling up the provision of mental health and psychological support for people injured or otherwise affected. Some US$ 5.3 million has been requested to respond to needs emerging until 31 May 2018. So far, $2.2 million have been provided by the oPt Humanitarian Fund, while the UN Central Emergency Relief Fund (CERF) allocated $1.26 million last week.

The health response is the main priority, given the enormous rise in casualties and the poor conditions of the health system in Gaza. Last week the MoH in Gaza indicated that 27 per cent of the drug items and over 40 per cent of the medical disposable needed to treat trauma casualties were unavailable. At least one hospital has noted that it consumed the same amount of medicines and supplies yesterday alone as it does in an average month. To address the most urgent gaps, over the past few days, health cluster partners have delivered a variety of drugs, medical disposables, first aid kits, external fixator sets, assistive devices, weapon wound kits, and dressing sets to Gaza hospitals and medical first responders. Additionally, MSF and MAP-UK deployed a number of surgical teams at the Shifa, Al Aqsa and Al Awda hospitals.

Due to the magnitude of yesterday’s injuries, the Health Cluster has indicated that despite the recent contributions, US$1.2 million is needed immediately for drugs and disposables and a further $3.9 million is needed to cover medical supply needs and emergency medical technicians. Given yesterday’s depletion of stocks of medical supplies, access to healthcare for non-trauma patients is also being compromised, requiring a further $19.5 million to cover the medium-term chronic needs of the MoH and NGOs providing essential healthcare until August.

Since the start of the demonstrations on 30 March, the World Health Organization (WHO) has documented attacks on health facilities and health personnel. One health staff has been killed, and 229 injured while providing treatment to injured people during the mass demonstrations. Thirty-two ambulances were also damaged.

The exposure to violence continues to have significant mental health and psychosocial (MHPSS) ramifications, particularly among children. Protection Cluster partners specialized in MPHSS have provided initial psychosocial support to at least 266 traumatized children, affected by different types of injuries, out of at least 598, so far identified. Responses and preparedness are being strengthened to address the increasing needs. Yesterday, 156 PRCS volunteers joined MoH/MHPSS department teams (around 50-70 PSS counsellors) to provide psycho-social first aid for injured persons at the seven hospitals in Gaza.

The Protection Cluster also continues to closely monitor the situation, collecting information relevant to its protection mandate, including for identification of urgent humanitarian needs and ways forward to address possible gaps in response, in coordination with the Health and Education clusters and OCHA.

[1] The number of people killed in other circumstances was revised following the receipt of new information.

Over 100 Palestinian injuries reported in Gaza during continuing demonstrations along the fence...