For the second Friday in succession, multiple Palestinian casualties during demonstrations at the perimeter fence in the Gaza Strip

As of 20:00 today, 6 April, seven Palestinians have been killed and over 1,350 injured by Israeli forces in the Gaza Strip, according to the Ministry of Health (MoH) in Gaza. The MoH reports that approximately 400 of the injuries were caused by live ammunition, of whom 25 are in critical condition. The Palestine Red Crescent Society (PRCS) reported that their teams handled 700 of the injured, including over 320 of the live ammunition injuries.

The casualties occurred in the context of ongoing mass demonstrations by Palestinians on the Gaza side of the perimeter fence with Israel, where the Israeli army imposes a ‘No Go Zone’, citing security concerns. Today’s event was the second in the ‘March of Return’, a series of mass protests on successive Fridays, leading up to the 70th anniversary of what Palestinians refer to as the 1948 ‘Nakba’, on 15 May. Last Friday’s demonstrations resulted in the highest number of casualties in a single day in Gaza since the 2014 hostilities, with 19 Palestinians killed by Israeli forces (or died of wounds sustained that day), and over 1,400 injured, including over half of them by live ammunition, according to the MoH. The Israeli authorities have stated that many of the fatalities were members of Hamas or militant groups, and accused the MoH of inflating the number of wounded by live ammunition. 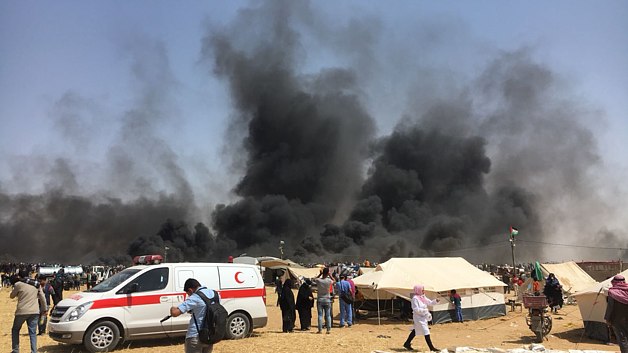 Today’s demonstrations were largely non-violent, in line with the call of the organizers, who have established tent camps in all five Gaza governorates, some 700 metres from the fence. As occurred last Friday, some Palestinians approached and attempted to breach the fence, burnt tires, threw rocks and, according to Israeli sources, fire bombs at Israeli forces, who have significantly increased its presence in the area, deploying tanks and snipers.

Operation theaters in MoH hospitals were overwhelmed by the number of injuries, with urgent needs reported for anesthesia and other essentials. The Gaza MoH also reported that medical supplies needed for emergency and trauma management continue to deplete, and replacements from the MoH in Ramallah are yet to arrive. There is a particularly severe shortage in external fixation sets. In a visit to Shifa Hospital, the largest in Gaza, where a state of emergency had been declared, OCHA witnessed 115 injured in the operation rooms, departments of intensive care, orthopedics and trauma departments.

The PRCS also warned of a shortage of medical supplies and of personal protective equipment for their 400-person team deployed across Gaza. The PRCS established another three Advanced Medical Posts near the areas where the protests were taking place, bringing the total number of such posts to five to cover all areas along the fence. In the afternoon hours, the posts in Jabalia and Gaza City were unable to cope with the number of injuries and transferred the injured to hospitals without proper first aid assistance.

The Health Cluster is monitoring the situation and providing support, in coordination with partners.

Medical supplies prepositioned by WHO, UNICEF, ICRC, and MAP including surgical, dressing, drug kits are being either used or will be used in the coming days. The Israeli-controlled Gaza crossings are closed until Sunday, 8 April, due to the Passover holiday, except for urgent humanitarian cases.

“Gaza’s health sector is struggling to deal with the mass influx of casualties between last week and today,” said the Humanitarian Coordinator, Mr. Jamie McGoldrick. “Years of blockade, internal divide and a chronic energy crisis, have left essential services in Gaza barely able to function. Health actors now estimate that US$ 2 million is urgently needed in the short-term for medicine, medical disposables, laboratory materials and other supplies for emergency care, while US$ 20 million is required in 2018 to meet the urgent health needs.”

Following last Friday’s casualties, in a statement attributable to his spokesperson, the UN Secretary-General expressed his deep concern about the clashes and casualties, and called for an independent and transparent investigation into the incident, to which Israel has objected, although the Israeli army has announced that it will hold its own internal investigation. The spokesperson for the UN High Commissioner for Human Rights stated that “In policing the green-line fence, Israeli security forces are required by international human rights law to respect the rights to peaceful assembly and expression and to use, to the extent possible, non-violent means to discharge their duties. In accordance with international human rights law, firearms may be used only in cases of extreme necessity, as a last resort, and in response to an imminent threat of death or risk of serious injury.”