Reducing morbidity and mortality for high-risk newborns in Gaza 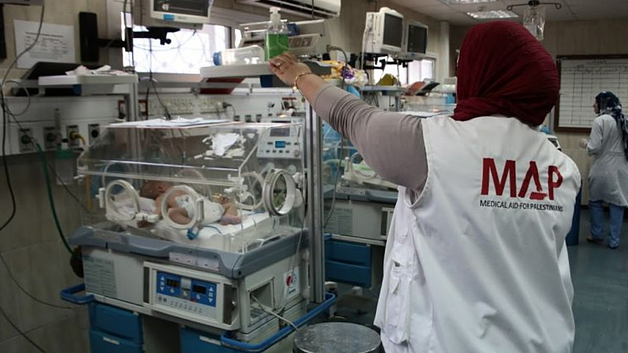 The health sector in the Gaza Strip is severely affected by the ongoing Israeli blockade, exacerbated by the chronic energy crisis that deteriorated in 2017, in the context of the internal Palestinian political divide. At times, hospitals have faced partial or full closure due to the lack of fuel to operate back-up generators. There is also a chronic shortage of essential and lifesaving drugs and medical disposables in Gaza’s hospitals, where care for new-born babies, particularly those in need of intensive care, is challenged by scarce medicines and supplies, and a lack of qualified health workers. 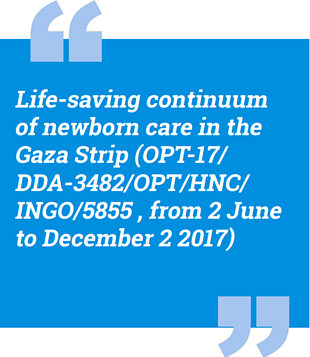 “There were chronic shortages of Surfactant, which is considered a lifesaving drug for premature babies. The monthly consumption of the six NICUs at Gaza is about 50 vials. Before the provision of Surfactant within this project (…) this drug item was out of stock for almost two months.” Dr Nabil Al Baraqoun, Consultant Paediatrician and Chairman of Gaza Neonatal Network (GNN)

Neonatal morbidity and mortality is considered a serious problem in Gaza, which results in dramatic complications with heavy medical, social and economic burdens on individuals, families and the community. New-born babies are identified among the most at-risk groups of patients, as a direct result of the fuel shortages. New-born deaths currently represent 68% of infant deaths – highlighting that the newborn period remains the period of highest risk for all infants. WHO studies found that three quarters of all newborn deaths occur in the first week of life and a half of new-born deaths occur in the first 24 hours after birth. This problem is exacerbated by the ongoing and critical shortages of medicines and supplies in Gaza’s hospitals. The MoH reports indicate that, during 2015 and 2016, the monthly average shortages of drugs related to maternal and child health was 38 per cent.

Medical Aid for Palestinians (MAP) has provided medicines, equipment and training for doctors, nurses and midwives working in neonatal and obstetric units in Gaza since 2008, aiming to support neonatal services and intensive care units in the Gaza Strip and improve neonatal care management to contribute to reducing morbidity and mortality.

Adam* was born 10 weeks early and weighed only 1.5 kg. He was admitted to the MAP-supported Neonatal Intensive Care Unit (NICU) at Al Shifa Hospital in Gaza in February 2017, where he was diagnosed with respiratory distress. In March 2017, Adam’s condition had stabilized and he was transferred to Al Quds Neonatal Unit. The following month, Adam returned to Al Shifa Hospital, this time suffering from hypothermia and sepsis. In April, thanks to support from the Humanitarian Fund , life-saving treatment could be provided, improving baby Adam’s blood results so he could return home to his family.

* Some names and identifying details have been changed to protect the privacy of individuals.