Practice targets families of perpetrators in contravention of international law

From mid-October through the end of November 2015, the Israeli authorities demolished or sealed 11 Palestinian-owned homes on punitive grounds, displacing 80 people, including 42 children (see table). Another four adjacent housing units were severely damaged by the explosions, temporarily displacing another 26 people.

The punitive demolitions were in response to Palestinian attacks targeting Israelis that occurred in 2014 and 2015.

The Israeli authorities also issued demolition orders against, or carried out preliminary surveys of, an additional 25 homes in connection to Palestinian attacks. As of end November, petitions by the families affected to the Israeli High Court of Justice were rejected, with one exception.

According to B’Tselem, from October 2001 to September 2004, during the second Intifada, Israel destroyed 628 housing units in punitive demolitions, displacing close to 4,000 persons, Nearly half of these homes (295 units) were adjacent to those directly targeted, and their residents were not related to a suspected perpetrator.[1]

The Israeli authorities justify punitive demolitions as a deterrent to others from perpetrating attacks against Israelis. The practice was discontinued in 2005 following the recommendation of an Israeli military committee that found it ineffective.[2] The Israeli authorities resumed this practice in mid-2014 after a number of Palestinian attacks and the Israeli Security Cabinet reinstated it on 14 October 2015. Since then, 16 residences have been demolished or sealed for punitive reasons in the governorates of Jerusalem (seven), Nablus (four), Hebron (four) and Ramallah (one). In total, these demolitions have displaced 117 Palestinians, including 59 children.

The destruction of private or public property in an occupied territory is prohibited under international humanitarian law (IHL) unless “such destruction is rendered absolutely necessary by military operations.”[3] Punitive demolitions do not fall within this exception. Punitive demolitions are also a form of collective penalty prohibited under IHL as they target the families of a perpetrator, or alleged perpetrator, who are not involved in the alleged act.[4] Additionally, depending on the specific circumstances, this practice runs counter to a range of rights and protections embodied in various international legal instruments that are legally binding on Israel. As noted by the Humanitarian Coordinator for the oPt, Robert Piper: “The law enforcement response must be consistent with international law. Punitive demolitions are inherently unjust, punishing innocent people for the acts of others.”[5]

Additionally, in October and November the Israeli authorities demolished 21 Palestinian structures in Area C and East Jerusalem on the grounds of the lack of a building permit, displacing 49 people, including 23 children. The total number of structures destroyed since the start of 2015 is 496 compared with 564 in the equivalent period of 2014. 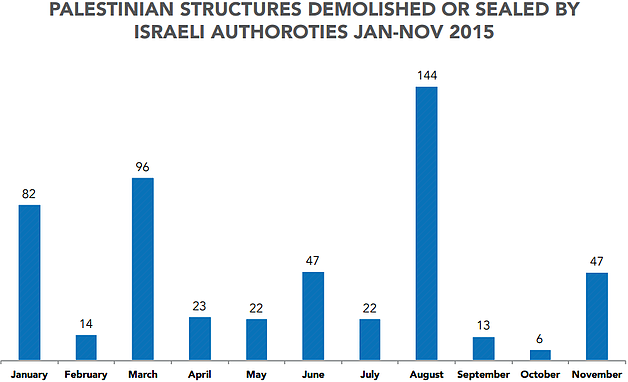 House demolitions almost always have a psychological impact on those directly affected, and sometimes even on the larger family and community. People who have been violently uprooted often express intense feelings of anger, sadness, hopelessness and helplessness. Some children and adolescents experience developmental regression, including bedwetting, as well as behavioural changes and concentration problems. The most common disorders observed in the weeks following the demolition are anxiety, depression and post-traumatic stress disorder.

[1] B’Tselem, Through no fault of their own: Punitive House Demolitions during the al-Aqsa Intifada, November 2004, p. 9.