Poor infrastructure and lack of funding put over 560,000 people at risk of flooding in the Gaza Strip

In the Gaza Strip, another winter season brings with it the threat of temporary displacement, property losses and health risks due to flooding and poor housing conditions. Insufficient funding, import restrictions, the ongoing energy crisis and the limited capacity of the Palestinian Civil Defense (PCD) are key factors that hinder the ability of the relevant actors to reduce vulnerability and respond effectively. 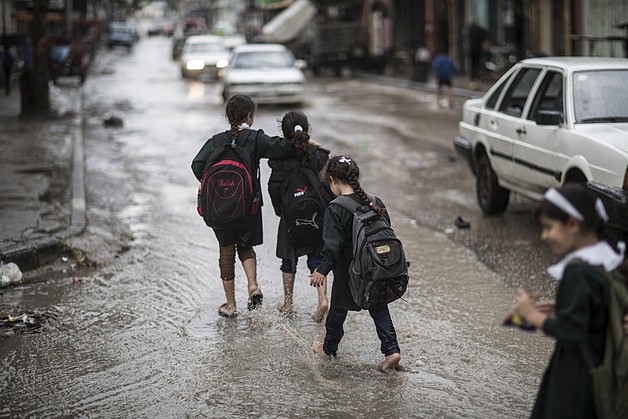 Some 60 communities in low-lying locations across Gaza have been identified by the Water, Sanitation and Hygiene cluster (WASH) as being at risk of flooding, even from light rainfall. These areas are home to over 560,000 people, 15 primary health centres and 69,000 students and teachers in 65 UNRWA and public schools[1] . Vulnerability is heightened by the precarious state of the infrastructure, which has undergone minimal upgrading or repair over the last decade despite rapid population growth and widespread damage from recurrent hostilities.

The ability of the Coastal Municipalities Water Utility (CMWU) and other WASH partners to implement infrastructural projects in high-risk areas has been impeded by restrictions on imports of materials regarded by Israel as “dual civilian and military” items.

The entry of such items is contingent on Israeli approval, which is required separately for each type of restricted item, in addition to approval for the project in principle. Since the beginning of the year, approvals for the entry of dual use construction materials (primarily cement and metal bars) via the Gaza Reconstruction Mechanism (GRM) have increased significantly in comparison with previous years.[2] However, applications for other restricted items such as generators with a 50 KVA capacity and above have either been rejected completely or have faced long delays, in some cases of up to 16 months.

These restrictions have affected the progress of  seven CMWU projects aimed at reducing the risk of flooding in low-lying areas of Khan Yunis, Rafah and Middle Area governorates. These projects seek to separate storm and wastewater networks, extend storm water drainage networks and infiltration ponds, ensure the supply of spare parts and maintenance for pumping equipment in low-lying areas, clear existing drainage channels, and provide spare parts, material and equipment to service providers.

Risk of exposure to extreme weather due to poor housing

The Shelter cluster has identified roughly 8,100 households across the Gaza Strip in need of winterization assistance as their residences are in a precarious condition, including leaking roofs, unsealed windows, damaged walls and lack of insulation. A further 24,000 households across Gaza were categorized by the Shelter cluster as vulnerable to extremes of weather due to sub-standard conditions. The Ministry of Social Development (MOSD) referred 1,233 of the most vulnerable cases falling under both categories to the cluster for assistance.  The Shelter cluster is referring these cases to partners for support.

Poor housing conditions result primarily from lack of access to construction materials for maintenance and repairs, including damage from the 2014 hostilities, alongside high unemployment and poverty rates. 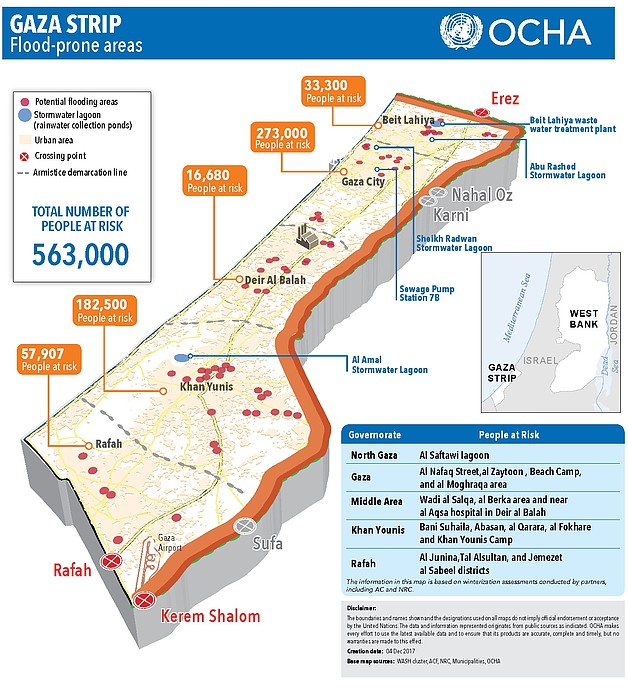 Gaza has had only four to six hours of electricity per day for the past seven months and this situation continues despite the reconciliation agreement reached between the Palestinian Authority and the Gaza de facto authorities in October 2017.

During periods of rainfall, the sewage/storm water station receives rainwater mixed with sewage. This must be pumped out to the storm water infiltration ponds, to the sea or to open areas. When electricity from the grid is not available, these plants rely on backup generators that run on expensive fuel. The Khan Younis and Rafah areas that depend on Egyptian feeder lines to a greater extent have been the most affected.

To maintain a minimal level of critical services, humanitarian agencies provide emergency fuel to health, water and sanitation, and solid waste collection facilities to run backup generators and vehicles. The number of facilities benefitting from this support has increased from 189 at the beginning of the crisis in March of this year, to 247 in October.

The WASH cluster anticipates that emergency fuel reserves will run out in mid-winter, by February 2017 at the latest. If no new funding is secured, the operation of storm water pumping stations and heavy machinery, trucks, and mobile pumps used to drain flooded locations may be undermined further. The entry of new generators and spare parts is hampered by Israeli import restrictions.

The capabilities of the Palestinian Civil Defense (PCD), which is one of the key responders in emergencies, have been curtailed in recent years due to a combination of damage to civil defense stations in the reoccurring conflicts, lack of investment in equipment and staff development due to Palestinian political divisions, and severe restrictions imposed by Israel on the entry of both specialized and non-specialized equipment. As a result, the PCD’s operational capacity in Gaza is estimated to have declined by up to 60 per cent since 2008 despite rapid urbanization and general population growth.

Much of the technical equipment required, such as high-capacity pumps and mobile barriers to tackle flooding, and heavy tools to conduct effective Urban Search and Rescue (USAR) operations, have never been available to the PCD in Gaza. Other equipment, including medium-capacity pumps used to clear flooded areas and mechanical ladders needed to reach third floors and above, are worn out and are partially or non-operational. The PCD in Gaza estimates that 10 per cent of first response vehicles such as firetrucks, light rescue vehicles and ambulances are non-functional. The rest are working at less than 40 per cent of their full operating capacity.

In the WASH cluster, only one of four Humanitarian Response Plan (HRP) flood mitigation projects received partial funding in 2017, while the others were not funded at all. Nevertheless, WASH partners, including local and international NGOs, UN agencies and the International Committee of the Red Cross (ICRC), are stockpiling resources and planning for flood prevention and response activities to support service providers. To this end, WASH partners are raising funds to cover the highest priority prevention and response needs, as identified by service providers and WASH cluster partners.

On 26 November 2017, mild rainfall caused the flooding of several houses, stores and vehicles in Gaza city, plus the sewage pump station in al Nafaq neighbourhood. At the time, no electricity was available and operational backup generators were insufficient to cope with the volume of water. Mobile pumps were deployed at the location for 12-18 hours to pump out the water. During this time, access to services was interrupted and the population was at risk of contracting water-borne diseases due to the seepage of sewage into the water.

Additional pre-emptive measures are being implemented by UNRWA for registered Palestine refugees and include the distribution of nylon or plastic sheeting and non-food-items to vulnerable cases who request support.  Assistance to non-refugee cases is, in some instances, covered by partners under ongoing projects.

The Education cluster is preparing interventions that include the distribution of winter clothes to students, ensuring that schools are winter-proof by maintaining school buildings, and initiating the winter emergency committee that comprises MoEHE, UNRWA, Civil Defense and the Education cluster coordinator. The committee will observe and monitor the situation, in particular during bad weather, to ensure student safety. 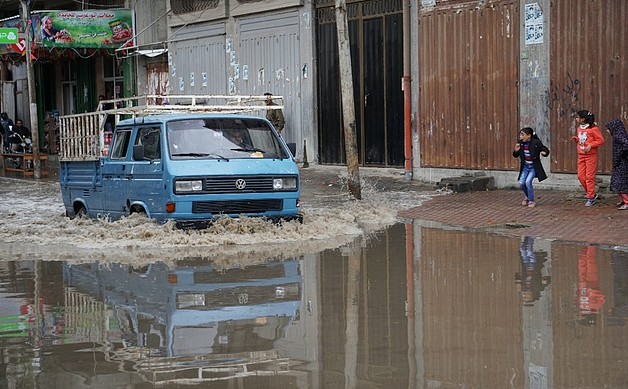 52-year-old Mohammed Wafi and his family have suffered from flooding every winter for the past 30 years. This reflects the deterioration in the neighbourhood’s infrastructure in the face of pressure from rainfall.

Mr. Wafi resides with his family in the low-lying flood-prone area of al-Waffia in Khan Younis. Their house is situated two metres below street level and is flooded by both water and sewage.  As precautionary measures, Mr. Wafi purchases sand to create a dam between the street and the house. He also seals the sewer drains in his house to prevent water from flowing back into the house. Despite these steps, water seeps into the house every year through the cracked walls, roof and drains, forcing the family to seek safer accommodation.

Mrs. Wafi said: “Every year, all my furniture, personal possessions, clothes, bedding, food and kitchen utensils are ruined.  Even my refrigerator, washing machine and oven no longer function due to water damage. We are living in really difficult circumstances”.

During the winter of 2016, the house was severely flooded and the family was forced to find alternative accommodation for an entire week.

Asked how the flooding impacts their social lives, Mrs. Wafi explained: “Our daughter dropped out of high school last year; every time there is heavy rain, all her books get soaked and can no longer be used. She loves to study but we cannot afford to keep buying her new books”.

* Education, Shelter and WASH clusters have contributed to this section