The second week of December 2017 has been marked by heightened unrest across the occupied Palestinian territory (oPt). The 6 December announcement concerning the United States’ recognition of Jerusalem as the capital of Israel triggered widespread demonstrations and clashes between Palestinians and Israeli forces. 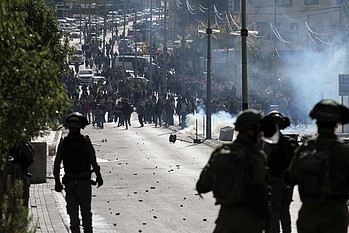 As of 13 December, one Palestinian civilian had been killed in Gaza as a result of clashes, and nearly 2,000 Palestinians had been injured throughout the oPt, the majority, (almost 70 per cent) due to tear gas inhalation requiring medical treatment, and by rubber bullets and live ammunition. Palestinian armed factions in the Gaza Strip have also fired rockets towards southern Israel on a daily basis, none of which has resulted in casualties or damage to date. Following this, Israel has launched a series of airstrikes targeting military sites in Gaza, which have killed three Palestinians, including one civilian, and injured 25 others.

The escalation in Gaza is of particular concern given the extremely fragile humanitarian situation. In spite of recent progress towards Palestinian internal reconciliation, most of the measures adopted by the Palestinian Authority since March 2017, which triggered the latest deterioration, are yet to be reversed. In particular, cuts in the funding of electricity supply to Gaza have compounded the chronic electricity deficit, increasing power outages from 12-16 to 18-20 hours a day, with a pervasive impact on all spheres of life. On 8 December, the Humanitarian Coordinator for the oPt, Robert Piper, released US$ 2.2 million from the oPt  Humanitarian Fund to cover urgent additional needs in the Gaza Strip in the areas of health and food security.

As winter approaches, an item in this month’s Humanitarian Bulletin addresses the risk of temporary displacement facing approximately over 560,000 people in some 60 locations across Gaza prone to flooding. The ability of organizations to reduce vulnerability and respond effectively is hindered not just by the ongoing energy crisis, but also by funding gaps and import restrictions imposed by Israel, citing security concerns. These restrictions are delaying the implementation of seven infrastructure projects, whose objective is to reduce the risk of flooding in central and southern Gaza.

November marked the beginning of the peak season in Gaza for the export of high value cash crops, such as strawberries. The economy in Gaza is characterized by sluggish growth and an unemployment rate which reached nearly 47 per cent in the third quarter of 2017. The increase in agricultural trade from Gaza recorded so far in 2017 is one of the few bright spots in an otherwise gloomy economic situation and has generated limited hope among farmers and traders for improved livelihoods during the upcoming export season.

The agricultural livelihoods of at least 80,000 families in the West Bank are the focus of another article in this Bulletin, which focuses on the olive harvest season, which lasted from mid-September to mid-November. This season was reported to have proceeded relatively smoothly, although an increase in incidents of settler violence and restrictions on access to olive groves behind the Barrier and in the vicinity of Israeli settlements continue to pose challenges for Palestinian farmers. An additional challenge to Palestinian livelihoods in the West Bank is addressed in another Bulletin item, which looks at the impact of recent military training exercises and access restrictions on 12 vulnerable herding communities in the southern Hebron area.

The ongoing unrest throughout the oPt is a reminder of the sensitivity of the issue of Jerusalem: in his most recent briefing to the Security Council, Special Coordinator Mladenov observed that ‘of all the final status issues in the Israeli-Palestinian conflict as identified in the Oslo Accords … Jerusalem is perhaps the most emotionally charged and difficult subject.” The UN Secretary-General, in his response to the US announcement, affirmed: “Jerusalem is a final status issue that must be resolved through direct negotiations between the two parties on the basis of the relevant Security Council and General Assembly resolutions, taking into account the legitimate concerns of both the Palestinian and the Israeli sides.”