This Humanitarian Bulletin coincides with the 50th anniversary of the June 1967 war and the start of Israel’s occupation of the West Bank, including East Jerusalem, and the Gaza Strip. To mark the occasion, this issue revisits the cases of ten Palestinians who featured in previous OCHA publications, to illustrate some of the enduring humanitarian concerns in the oPt.

Of particular concern these days is the aggravation of Gaza’s chronic electricity crisis, which has undermined already precarious living conditions over the past decade. The drivers of this problem in recent years have included internal Palestinian disputes; limited collection of bills from consumers and related funding shortages to run Gaza’s sole power plant (GPP); the destruction of electricity-related facilities by Israeli airstrikes; and Israeli restrictions on the import of spare parts and equipment, citing security concerns.

In the April 2014 issue of the Humanitarian Bulletin, Abeer al Nemem, a mother-of-11 from Beach Camp, in the Gaza Strip, recounted the difficulties she faced in carrying out the most basic of daily activities due to electricity cuts, such as providing tea or warm milk for her children. Revisiting Abeer three years later, the situation has deteriorated further following the shutdown of the GPP in April 2017 and the reduction in electricity supply by Israel, at the request of the West Bank-based Palestinian Authority (PA). These recent developments occurred in the context of an escalation of the decade-long conflict between the PA and the Hamas de facto authorities.

As a result, the majority of the population has been plunged into almost constant darkness and basic services, including health facilities, water supply and wastewater management, have almost ground to a halt, depending almost exclusively on a UN emergency fuel operation. Although the GPP resumed partial operation on 21 June, following the purchase of fuel through Egypt, the situation remains precarious. On 14 June, the Humanitarian Coordinator in the oPt, Robert Piper, warned of the “disastrous consequences of a further reduction in electricity-supply to the Gaza Strip” and called upon “the Palestinian Authority, Hamas and Israel to put the welfare of Gaza’s residents first and to take the necessary measures to avoid further suffering.”

The deteriorating health situation in Gaza, and the difficulties patients face in accessing life-saving treatment outside of the coastal enclave, has been a recurrent topic in the Bulletin. In the January 2017 issue, Siham Al Tatari, a cancer patient, recounted having to interrupt her chemotherapy treatment for seven months and missing two appointments in the Augusta Victoria Hospital in East Jerusalem before she finally obtained a permit. By June, the cancer had spread to Siham’s bone marrow and, at the time of interview, she was still waiting for a permit for her hospital appointment. The condition of patients like Siham is also affected by the ongoing internal Palestinian conflict: since March 2017, the referral of over 1,600 patients to medical treatment outside Gaza has been disrupted, following the apparent suspension of payments for this service by the PA. A number of patients who missed treatment outside of Gaza because of delays in the PA’s Ministry of Health referral of documents have reportedly died in recent weeks, according to initial media reports.

The West Bank topics covered in this Bulletin include longstanding humanitarian concerns: the impact of the Barrier in the Jerusalem area and the rural West Bank; concerns about excessive use of force and the condition of children in detention; communities at risk of risk of forcible transfer; and the many restrictions on building and access to services experienced by Palestinian communities in Area C. 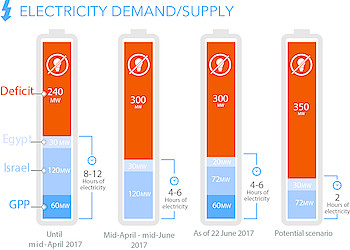 A common concern linking many of these issues is the impact of the Israeli settlements which have been established across the West Bank, including East Jerusalem, in contravention of international law. The seizure of land for the establishment and expansion of settlements, alongside settler violence and the takeover of land by settler groups, have deprived Palestinians of their property and reduced the space available for them to sustain their livelihoods. Many of the restrictions on Palestinian movement, including the Barrier, which undermine access to basic services and livelihoods, are imposed to protect settlements and facilitate their daily life.

In December 2016, the UN Security Council adopted Resolution 2334, which called on Israel to take steps “to cease all settlement activities in the occupied Palestinian territory, including East Jerusalem.” However, as indicated by the UN Special Coordinator for the Middle East Peace Process, Nikolay Mladenov in his June briefing to the Security Council, “no such steps have been taken […] while there has been substantial increase in settlement-related announcements […], with plans for nearly 4,000 housing units moving forward and 2,000 tenders issued.”

In a statement issued this month, the Humanitarian Coordinator for the oPt stressed that “from a humanitarian’s perspective, 50 years of occupation represents a gross failure of leadership by many – local and international, Israeli and Palestinian. Too many innocent civilians – Palestinian and Israeli alike – are paying for this abject failure to address the underlying causes of the world’s longest-running protection crisis.”