as part of
The Monthly Humanitarian Bulletin | May 2019

Since late March 2018, thousands of Palestinians have participated in the weekly Great March of Return (GMR) demonstrations in the vicinity of Israel’s perimeter fence between the Gaza Strip and Israel, calling for the Palestinian right of return and the ending of the Israeli blockade. The large number of casualties among unarmed Palestinian protestors, in particular the high number injured by live ammunition -in circumstances that did not appear to constitute an imminent threat of death or serious injury to Israeli soldiers behind the fence, has raised concerns about excessive use of force by Israeli forces.[1] The first article in this month’s Bulletin examines the humanitarian impact of these injuries on the individuals themselves and the implications for the overstretched Gaza health system.

On 29 May, the World Health Organization (WHO) released a report  on Palestinian injuries during the first year of the GMR, based on research which WHO conducted in collaboration with over 20 agencies. From 30 March 2018 to 30th March 2019, 277 Palestinians were killed and over 28,000 injured during the period of these protests. The report notes that the trauma stabilization points, established by WHO with the support of the Ministry of Health and Palestine Red Crescent Society, have removed a significant burden of the GMR trauma caseload from the already overwhelmed hospital network in Gaza, and that between 435 and 1,227 lives are estimated to have been saved as a result of the established trauma referral pathway.

Nevertheless, some 60 per cent of the GMR injuries needed hospital treatment, including over 6,800  caused by gunshot. According to WHO, “while this would overwhelm even well-prepared emergency services in the best-equipped health systems everywhere, it is an almost insurmountable challenge for Gaza’s hospitals.”[2] 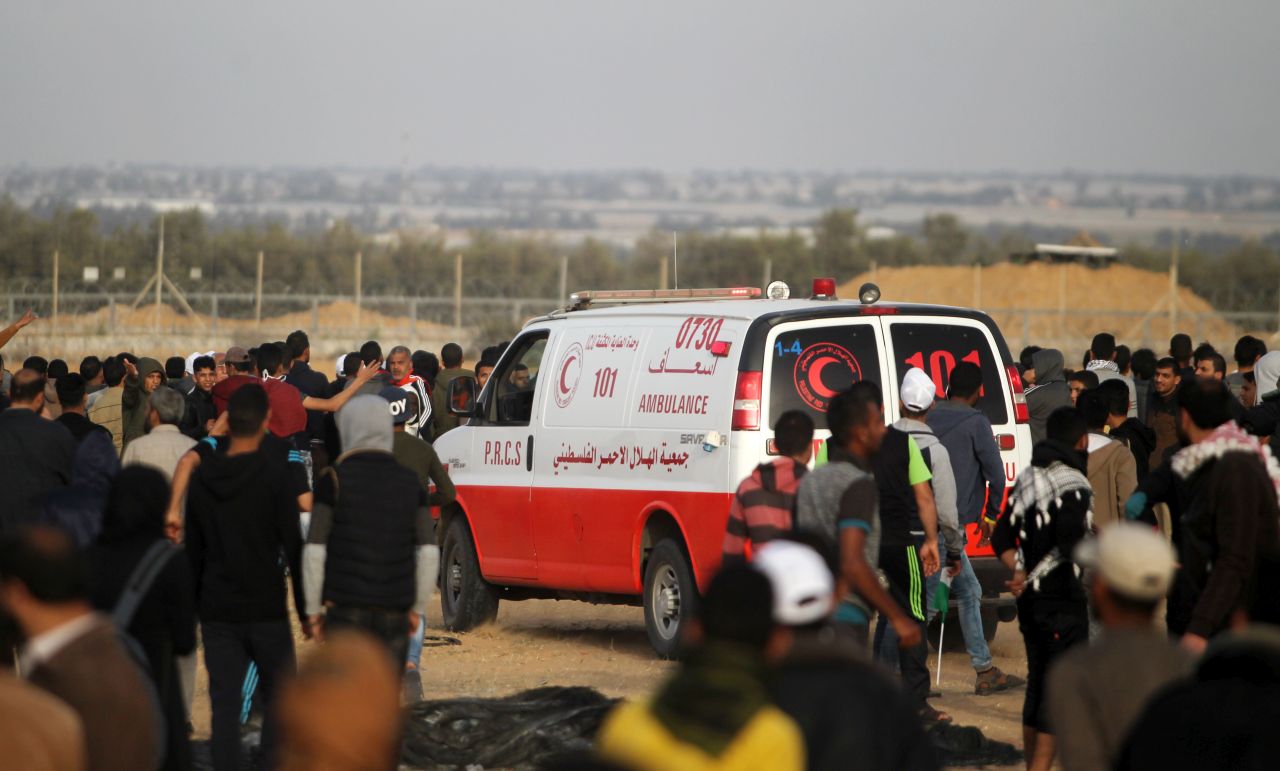 Israel’s use of high-velocity ammunition against demonstrators has caused “excessive damage to the bone and irreversible damage to neurovascular structures. Such injuries are often complicated by extensive soft tissue damage.”[3]  These have resulted in permanent and life-changing injuries: WHO estimates that between 20 and 30 per cent of all those with gunshot wounds to the limbs, between 1,209 and 1,746 patients, will need some form of specialized tertiary treatment.

Providing such treatment will require additional resources from a health system experiencing longstanding challenges, including shortages of medicines and medical disposables, a continuing salary crisis affecting government employees, and lack of funding. As noted by Dr. Gerald Rockenschaub, head of the WHO office in the occupied Palestinian territory (oPt), “trauma interventions in Gaza are not only a response to the emergency but also a longer-term investment in building the capacity of the health system to address the critical service gaps that have persisted for years.” Due to the enormous increase in injuries, health was the only sector which requested an increase in funding in the 2019 Humanitarian Response Plan (HRP), compared to 2018: by end-May, some 42 per cent of the $32 million requested was secured.

An additional challenge for those injured in the GMR is continuing Israeli restrictions on access for patients requiring health care unavailable in Gaza. Between 30 March 2018 and 30 April 2019, of the 550 applications from patients injured in the GMR demonstrations to exit Gaza via the Erez crossing to access healthcare in Israel and the West Bank, only 17 per cent were approved by the time of their scheduled appointment. Although the Egyptian-controlled Rafah crossing has been almost continuously open since July 2018, exit to Egypt, including by patients, remains limited, as illustrated in one of this Bulletin’s case studies.

The other article in this month’s Bulletin concerns the restrictive planning regime in East Jerusalem, which makes it almost impossible for Palestinians to obtain building permits to meet their basic housing and infrastructure needs. Consequently, entire neighbourhoods are unlisenced and thus face the threat of demolitions and displacement.

One of these is the Wadi Yasul area of Silwan, home to some 700 Palestinians. The Israeli authorities have zoned it as a ‘green area’, and repeatedly rejected attempts by residents to rezone the neighbourhood as “residential”. About 500 people living in 50 buildings in Wadi Yasul are at risk of displacement following the exhaustion of almost all domestic legal remedies. Several structures were demolished there in April, which witnessed the highest number of East Jerusalem demolitions in a single month since OCHA began systematically recording this in 2009. Five people were seriously injured by Israeli forces during the operation. This and the impact of demolitions on residents who lost their homes, including children, are covered by one of this Bulletin’s case studies.

[1] On 18 March, the independent and international Commission of Inquiry into the protests in the oPt, appointed by the United Nations Human Rights Council, released its final report, having investigated all 189 Palestinian demonstration-related fatalities between 30 March and 31 December 2018 and tracked more than 700 injuries. With the exception of two cases, the Commission found reasonable grounds to believe that the use of live ammunition by Israeli forces against protestors was unlawful.

[2] WHO, Health Cluster oPt, Emergency Trauma Response to the Gaza Mass Demonstrations 2018–2019: A One-Year Review of Trauma Data and the Humanitarian Consequences, May 2019, p. 10.