The main article in this month’s Bulletin concerns the rehabilitation needs of the thousands of Palestinians in Gaza who have been seriously injured since 30 March in the ‘Great March of Return’ demonstrations along Israel’s perimeter fence. It is estimated that over 1,400 Palestinians may suffer from a long-term disability due to the severity of the injuries incurred. The Ministry of Health in Gaza is coordinating rehabilitation care for discharged patients, with the support of a variety of Health Cluster partners. This additional burden to the already fragile health system in Gaza is taking place against the backdrop of deteriorating living conditions and severe funding shortfalls for humanitarian agencies.

One dimension of the dire living conditions in the Gaza Strip concerns sub-standard housing, the subject of another article in this Bulletin. A survey conducted by the Shelter Cluster found that some 19,700 currently inhabited housing units are beyond repair, requiring full reconstruction, and another 24,000 were identified as in need of urgent shelter assistance. During the 2014 hostilities, some 171,000 homes in Gaza suffered some form of damage (excluding total destruction), of which almost 60,000 are yet to be repaired. Lack of financial resources due to the high levels of unemployment and poverty, is the primary reason behind the widespread substandard housing. The longstanding Israeli restrictions on the import of building materials to Gaza have contributed to the current situation, although following the establishment of the Gaza Reconstruction Mechanism in 2015, Israel has allowed the controlled entry of restricted items. Shelter vulnerability has an impact on the physical safety, health and wellbeing of those affected, and is a major concern in the event of a new mass displacement in the context of hostilities, as most IDPs are usually hosted in private homes. 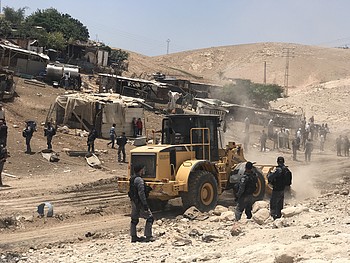 In the West Bank, new legislation risks significantly limiting the ability of individuals and human rights organizations to challenge the demolition or seizure of Palestinian properties in Area C and in East Jerusalem. In April 2018, a military order was issued which allows for the demolition of new unlicensed structures in Area C within 96 hours of the issuance of a removal notice; implementation of this bill is now frozen, pending a decision by the Israeli High Court of Justice (HCJ). In addition, a law passed last year threatens to significantly increase demolition rates and fines in East Jerusalem starting in October 2019, when it will be applicable to residential buildings in the city affected by existing demolition orders. The demolition of homes and other structures for lack of Israeli-issued building permits, which are nearly impossible to obtain, is a key component of the coercive environment exerted on Palestinians in the West Bank, including East Jerusalem, and generates a risk of forcible transfer for many.

Another factor exacerbating the coercive environment in East Jerusalem is the Israeli settler organizations’ takeover of properties in Palestinian neighborhoods. One of the Bulletin’s articles examines the impact of this practice in the densely-populated Batan al Hawa area, where some 200 Israelis have already settled in various buildings. The resulting tensions have triggered movement restrictions, detentions, house arrests and expulsion orders, which in turn have pushed some Palestinian residents to move out of the area, especially due to concerns over children’s safety.

During first days of July, the Israeli authorities adopted a series of measures and restrictions, ahead of the demolition of the Palestinian Bedouin community of Khan Al Ahmar–Abu Al Helu. Following a new petition filed by the community, the Israeli HCJ issued a temporary injunction preventing the demolition, at least until the government responds by 11 July. This is one of 18 communities located in or next to an area slated in part for the strategic E1 settlement plan. Since 1 July, eleven demolition incidents have occurred in other communities across the West Bank, displacing 59 Palestinians, including 37 children, and affecting more than 200 others.

“What we are seeing unfold on the ground is deeply disturbing,” said the Humanitarian Coordinator for the oPt, Jamie McGoldrick, in a statement issued on 5 July. “Demolitions have a devastating impact on families and on communities. These demolitions are particularly outrageous because they target communities who already live in extremely difficult conditions, with high levels of humanitarian needs. I call again on the Israeli authorities to cease demolitions and other measures that may result in the forcible transfer of Palestinians.”