On 17 December 2018, the humanitarian community in the oPt launched the Humanitarian Response Plan (HRP) for 2019, an appeal for $350 million to fund assistance and protection for 1.4 million Palestinians identified as the most vulnerable. This appeal is significantly smaller than the 2018 HRP (almost $540 million), despite the fact that the level of humanitarian need, particularly in the Gaza Strip, increased. As elaborated in this Bulletin, the reduction reflects an attempt to prioritize the most urgent needs in the face of record low funding levels during 2018 and ever greater challenges to the ability of humanitarian agencies to operate, along with a recognition that these constraints are not likely to improve in the foreseeable future.

The rise in attacks designed to delegitimize humanitarian action, one of the challenges facing humanitarian agencies, is the subject of another article in this month’s Bulletin. It highlights a recent survey among international NGOs operating in the oPt, which reveals that most organizations have been subject to false accusations about violations of counter-terrorist legislation and conduct of political action against Israel, which have had a range of negative impacts on their activities. These include the need to allocate time and resources to address allegations, which would be otherwise allocated to the delivery of aid; the defunding of certain operations by some donors prioritizing risk avoidance; and reputational damage. The impact has been compounded by longstanding access restrictions imposed on humanitarian staff and operations by Israel and Hamas, new restrictive legislation, and attacks on human rights defenders. 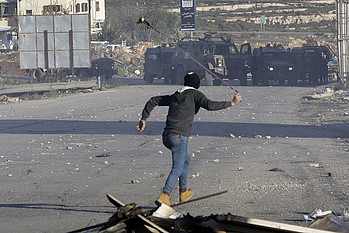 The massive rise in Palestinian casualties has been one of the key factors behind the deterioration of the humanitarian situation in 2018. Overall, a total of 295 Palestinians were killed and over 29,000 injured by Israeli forces, the highest death toll in a single year since the 2014 conflict in Gaza, and the highest number of injuries recorded since OCHA began documenting casualties in the oPt in 2005. Over 60 per cent of the fatalities (180 people) and almost 80 per cent of the injuries (over 23,000) were in the context of Gaza’s ‘Great March of Return’ (GMR) demonstrations, which began on 30 March 2018 and is still ongoing.

The violence and casualties during these demonstrations have had a differentiated impact on men, women, boys and girls. The final article in this Bulletin details the impact of the GMR on Palestinian women and girls, as revealed by a rapid assessment carried out by UNFPA (United Nations Population Fund). Despite the relative low proportion of female casualties, the consequences of such an event are often more severe for women, due to various social and cultural norms. The enormous number of demonstrators injured, compounded by the shortage of electricity, drugs and equipment, has forced hospitals to prematurely release patients, putting additional pressure on female family members who are primarily responsible for the treatment of house-bound family members.

Although casualties in the West Bank declined during the year compared to 2017, in December, more Palestinians were killed by Israeli forces in the West Bank (8 people) than in the Gaza Strip (6 people); two Israeli soldiers were also killed by Palestinians and an Israeli baby delivered prematurely following the injury of his mother in an attack and died a few days later. The events included Palestinian shooting attacks, Israeli shooting of suspected perpetrators and other people in unclear circumstances, large scale arrest operations and related clashes. While the tension decreased towards the end of the month, two of the main entrances to Ramallah city remain closed, and Palestinian movement along other key traffic arteries across the West Bank is still controlled or restricted.