On 9 April, the right leg of Mohammed Al Ajouri, a 16-year-old boy and an athlete from Gaza featured in this Humanitarian Bulletin, was amputated. Ten days earlier he was shot and injured by Israeli forces while participating in the first of the “Great March of Return” series of Friday demonstrations, near the perimeter fence around Gaza. He is one of the nearly 2,000 Palestinians who, according to the Palestinian Ministry of Health figures, were injured by live ammunition since 30 March in such events. As of 30 April, 40 Palestinians have also been killed by Israeli forces during these demonstrations, and another ten in other circumstances. On successive Fridays since 30 March, hundreds of demonstrators, out of thousands, have approached the fence and attempted to damage it, burned tires, thrown stones and, to a lesser extent, Molotov cocktails towards Israeli forces deployed on the other side of the fence. No Israeli injuries have been reported. At present, there is no evidence that the demonstrators killed or injured by live ammunition have posed an imminent threat of death or risk of serious injury to Israeli soldiers, hence raising strong concerns of excessive use of force, according to the Office of High Commissioner for Human Rights. 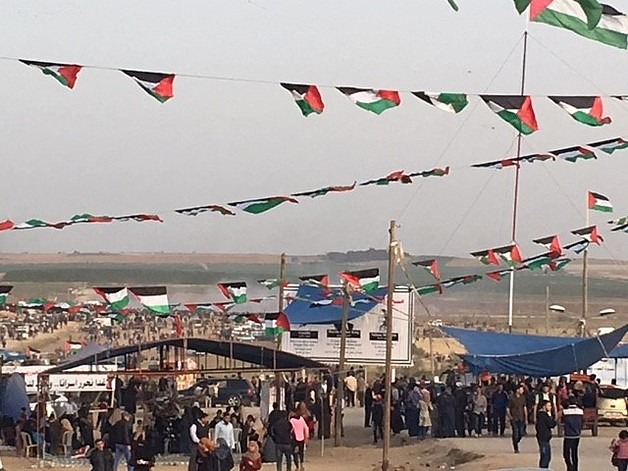 In their responses, humanitarian actors have prioritized the delivery of immediate life-saving healthcare; the provision of mental health and psychological support for people injured or otherwise affected; and the monitoring and documenting of possible protection violations. As detailed in this Bulletin, while interventions in these three priority areas are ongoing, agencies have appealed for an additional US$ 5.3 million to scale up activities until 31 May 2018 -  the expected six-week duration of the demonstrations, plus an additional two weeks. On 25 April, the Humanitarian Coordinator released $2.2 million from the oPt Humanitarian Fund reserve for unforeseen emergencies to support the three areas of intervention.

The surge in humanitarian needs as a result of the ongoing events takes place against an overall dire humanitarian situation in the Gaza Strip. The health system, in particular, is on the verge of collapse as a result of the 10-year blockade, the deepening intra-Palestinian political divide, deteriorating energy supply, inconsistent payment of public sector medical personnel, and growing shortages in medicines and disposables.

The same factors are also undermining the access of over 450,000 children in the Gaza Strip to school education, as detailed in another of this Bulletin’s articles. The electricity shortage, with cuts of up to twenty hours a day, restricts students’ study time at school and ability to concentrate at home, and increases the drop-out rate. Also of concern is the unprecedented financial crisis faced by UNRWA, which provides schooling to some 272,000 of Gaza’s children. While the Agency has secured sufficient funding to complete the current school year and to maintain the delivery of other core services into the summer, the re-opening of schools in the second half of the year remains uncertain.

April also witnessed a number of worrying developments in the West Bank, including an increase in settler violence (to be addressed in the May issue of the Humanitarian Bulletin), and a tightening of the coercive environment faced by Palestinian communities in Area C. In a hearing held on 25 April on the fate of the Khan al Ahmar-Abu al Helu Bedouin community in the outskirts of East Jerusalem, the Israeli High Court of Justice indicated that it will not rule against the relocation of the community, despite the objection of the residents; a final ruling is expected in the near future. Without the genuine and informed consent of the residents, which is nearly impossible to obtain in the present coercive environment, such relocation may amount to forcible transfer, a grave breach of the Fourth Geneva Convention.

An additional concern affecting many women living in Area C communities, also highlighted in this Bulletin, is domestic gender-based violence (GBV). A recent study conducted in five such communities in the Jordan Valley found that 46 per cent of the people surveyed believe that violence against women by their husbands is a legitimate practice, and 87 per cent indicated that women should not report domestic violence. A series of workshops targeting students and their parents at schools in the five communities, aimed at reducing the incidence of GBV, was carried out by two NGOs in recent months and concluded in March.

In his briefing to the Security Council on 26 April, the UN Special Coordinator issued a stark warning: “What is happening today in Gaza is an injustice that no man, woman or child should have to endure: the deplorable living conditions; the consequences of the continued, suffocating closures, the control by Hamas; and the mounting risk that Gaza could trigger a new conflict building up. People should not be destined to spend their lives surrounded by borders they are forbidden to cross, or waters they are forbidden to navigate. They should not be destined to live under the control of Hamas, which invests in military activities at the expense of the population. I firmly believe there is a way out. These challenges are political, they are man-made and, thus, resolvable if all sides firmly commit to supporting practical solutions that can be implemented quickly, effectively and sustainably.”