Sami is a 17-year-old boy who loves singing and is musically gifted. In May 2018, he was shot in the chest by Israeli forces during a demonstration near Israel’s perimeter fence with Gaza. In addition to his physical injury, he became depressed, stopped attending school and isolated himself from his community. With the help of a local NGO he managed to recover (read more). Thousands of Palestinian boys, girls, men and women injured in similar circumstances are still struggling.

As we enter 2020, this Humanitarian Bulletin presents the key figures and trends that OCHA has been monitoring in the occupied Palestinian territory (oPt) during 2019 and over the decade since 2010. These relate namely to casualties, destruction of property, access restrictions and displacement. While these figures and trends are indicative, they do not represent a comprehensive overview of all factors that shaped the humanitarian situation during the decade (For a more comprehensive analysis of the current situation, see: 2020 Humanitarian Needs Overview).

Each of the sections below includes an excerpt from a story featured in recent years by OCHA, or its partners, that illustrates the human faces behind the numbers: people struggling to live in dignity.[1] The full stories, along with further statistics and background to each of the issues raised, are available in the links embedded throughout the text. 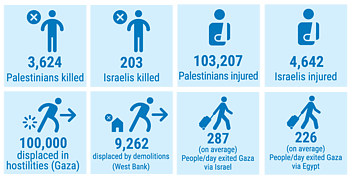 In 2019, a total of 137 Palestinians were killed by Israeli forces (135) or settlers (two), bringing the death toll among Palestinians over the past decade to 3,624. Of these, 87 per cent were killed in Gaza, mostly during the 2012 and 2014 escalations, as well as in the ‘Great March of Return’ (GMR) demonstrations that started in 2018. Three out of four Palestinians killed during the decade were civilians, including 805 children. During these ten years, Palestinians killed 203 Israelis, including ten in 2019. Nearly half of the Israeli fatalities were civilians. 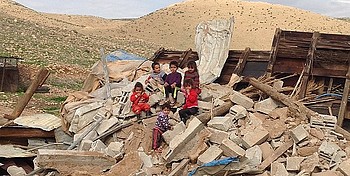 The large proportion of Palestinian and Israeli civilian casualties highlights long-term concerns about possible violations of international humanitarian and human rights law, compounded by concerns about serious gaps in accountability.

Although some restrictions have been relaxed in 2019, the blockade on Gaza continues. The exit of persons has remained limited primarily to businesspeople and patients, alongside restrictions on the movement of goods. Despite growth in recent years, the volume of imports and exports remains below the equivalent figures for the first half of 2007, before the imposition of the blockade; at the same time, Gaza’s population has since grown from 1.4 million to two million.

Food insecurity, poverty and unemployment have also risen in Gaza over recent years and are far higher than in the West Bank, at a time when humanitarian funding is declining. In 2019, contributions to the Humanitarian Response Plan (HRP) were the lowest of the decade.

Overall, every second Palestinian (or 2.5 million people) in the oPt is estimated to be in need of humanitarian assistance in 2020. In this context, the 2020 HRP was launched in December 2019 to target 1.5 million of the most vulnerable Palestinians throughout the oPt, mostly in Gaza. The plan encompasses 199 projects to be implemented by 85 organizations.

[1] OCHA and its humanitarian partners are mandated to address the humanitarian situation of Palestinian civilians in the oPt; stories featured in this section are drawn from this work.