During May, at least 320 people, half of them children, had to evacuate their homes for up to 12 hours on three consecutive days to make way for a large military training exercise conducted by the Israeli army. The affected families live in four herding communities in the northern Jordan Valley: Humsa al Baqi’a, Khirbet Ras al Ahmar, Ibziq, and Hammamat al Maleh (the latter is split into three separate areas Al Maleh, Al Burj and Al Meiteh).

Although all the communities were served with written evacuation orders a few days in advance, they were not provided with an alternative place to stay for the duration of the exercise. A few of the affected families reported property losses as a result of the exercise, including grazing and agricultural land set on fire by live ammunition and the deaths of several newborn lambs that could not be evacuated or tended.

This incident follows a period of three months during which no similar displacements were recorded. However, Israeli military exercises involving the temporary displacement of entire communities have become systematic in recent years, with more than 100 such incidents recorded since the beginning of 2012. Some communities in the northern Jordan Valley have been temporarily displaced more than 20 times.

Military exercises take place in areas designated as “firing zones” and which cover approximately 18 per cent of the West Bank and 56 per cent of the Jordan Valley and Dead Sea area. A civilian presence in these zones without permission from the Israeli authorities, which is rarely granted, is formally prohibited. Despite this, there are at least 38 Bedouin and herding residential areas with over 6,200 residents currently located in these regions.11 Many of the communities affected were present in these areas prior to them being designated as closed during the 1970s.

Additionally, there are eleven Israeli settlement outposts and related infrastructure located either partially or completely in firing zones.12 However, there have been no reports of similar evacuations affecting residents of these sites in the context of military training

This type of displacement disrupts the community’s livelihoods as people are forced to move with their livestock to unsuitable areas. They sustain losses as a result of the death of animals and burning of pasture land. The exercises often spread panic among children and impede access to schools. Compounded by longstanding restrictions on access to land and services, demolitions and confiscation of property, harassment and settler violence, this practice generates a coercive environment that contributes to putting pressure on Palestinian residents to leave these areas permanently.

Last year Israeli media reported that a senior officer from the IDF Central Command confirmed that the frequency and scope of military training had significantly increased in recent times, particularly in the Jordan Valley, and that such exercises contribute to the prevention of “illegal construction” in “firing zones”.

Under international humanitarian law, temporary evacuations may be undertaken only in the context of active hostilities where the security of the protected population or imperative military reasons so demand.

“The women left the community on a tractor; we cannot walk this long distance with the children; one of the women is pregnant and we have old women as well. This time, we stayed a few kilometres away from our community. We had no shelter or shade to protect us and our children from the hot sun at this time of the year.” 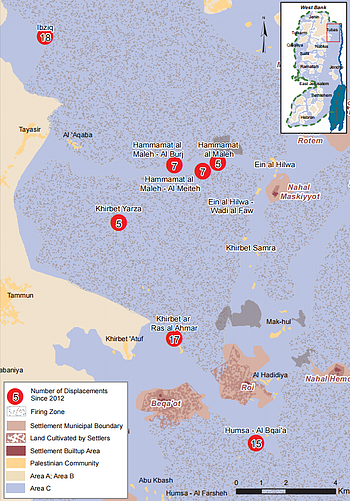