Demolitions across the West Bank surged in July and August 2016. The Israeli authorities demolished, forced people to demolished, or confiscated 177 Palestinian-owned structures, displacing 267 Palestinians and otherwise affecting the livelihoods of another 2,800 in the two-month period.

Eight of these structures were the family homes of Palestinians suspected of perpetrating or assisting the perpetration of attacks against Israelis, and demolished on punitive grounds. Another structure, a three-storey building, was shelled and then bulldozed by Israeli forces during an arrest operation in Surif village (Hebron). The remaining structures, located in Area C and East Jerusalem, were demolished or confiscated due to the lack of a building permit, which is nearly impossible to obtain. Overall a total of 42 communities and localities were affected.

These figures follow a significant decline in May and June, partially due to a halt announced during the month of Ramadan. The total number of structures targeted in the first eight months of the year was 821, up 50 per cent compared with all of 2015 (548).

Of the structures targeted in July and August, 94 were located in vulnerable Bedouin and herding communities in Area C and were demolished or confiscated on the grounds of lack of a permit. Most of the approximately 30,000 Palestinians living in such communities are at risk of forcible transfer due to the coercive environment generated by Israeli policies. This includes denial of adequate planning to allow people to build legally in their current locations, and the related destruction and confiscation of homes and livelihood-related structures.

In one incident on 8 August, the Israeli authorities uprooted and confiscated 1,000 metres of a water pipeline and damaged an additional 2,500 metres, provided by UNICEF and funded by an international donor. The connection was intended to supply drinking water to nearly 1,000 people in five water-scarce communities (Khirbet Yarza and four nearby hamlets) located within a closed area for military training (“firing zone”) in the northern Jordan Valley. This is the third incident since January 2015 involving the targeting of water-related items in this area.

The cost of piped water supplied from networks is about five NIS per cubic metre (m³), while unserved communities pay between 20 to 50 NIS/m³ to private vendors for tankered water depending on the distance and access constraints. Water purchases can account for up to half of a family’s monthly expenses in the poorest communities.[1]

In another incident on 16 August, in the herding community of Jurat al Kheil (Hebron), the Israeli authorities demolished seven homes, eight latrines, an animal shelter, and confiscated a concrete mixer; three plastic water tanks (not included in the total) were also destroyed during the incident. Three of the latrines were funded by an international donor and provided by a humanitarian organization. Seven families, comprising 37 members including 16 children, were displaced.

Since the beginning of 2016, the Israeli authorities have demolished or confiscated a total of 222 structures and items provided as humanitarian assistance, many in response to previous demolitions. This is more than double the total for all of 2015. 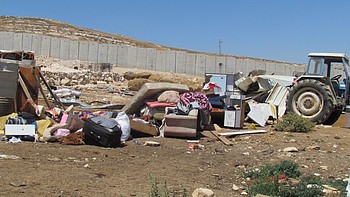 In July and August, 50 structures were demolished within the Israeli-defined municipal boundaries of Jerusalem, including three structures demolished by their owners following demolition orders. This brings the number of demolitions since the beginning of the year to 128, the highest in any entire year since 2009, when OCHA began to systematically record this indicator. Half of the structures targeted so far in 2016 were residential, including 21 inhabited homes resulting in the displacement of 124 people and 43 uninhabited or under construction houses; the other half were commercial and livelihood-related structures.

The largest incident, involving the demolition of 15 structures, occurred on 26 July in a section of Qalandia village, which lies within the municipal boundaries of Jerusalem although it is separated from the rest of the city by the Barrier.[2] This incident was unusual because in recent years the Israeli authorities have refrained from carrying out demolitions in municipal areas behind the Barrier, leading to widespread and uncontrolled residential building. It remains unclear whether the Qalandia demolitions were an isolated exception or represent the beginning of a policy change. Palestinians living in these areas continue to pay municipal taxes although the public infrastructure, resources and services they receive are significantly degraded or absent entirely.

The case of Susiya

The herding community of Susiya in Hebron governorate faces a heightened threat of mass demolitions and forcible transfer following a decision in July 2016 by the State of Israel to withdraw from negotiations with the community’s lawyer over the fate of the community.[3] The case is pending before the Israeli High Court and the State will submit its position in December.

The village is sandwiched between the settlement of Susiya in the south and a settlement outpost in the north. Village residents have already experienced various waves of displacement. In 1986, Israel declared the village an archaeological site and evicted all of its residents, erecting the northern outpost on the same site some years later. Most of those who relocated to the current site experienced mass demolitions in 2001 and in 2011 on the grounds of lack of a building permit.

At present, around 170 structures in the current village, half of them provided as humanitarian assistance, have outstanding demolition orders. Planning schemes submitted by residents to the Israeli authorities, which would allow building permits to be issued, have been repeatedly rejected. In recent years, a settler organization petitioned the Israeli Supreme Court to expedite the execution of the demolition orders.

In contrast, Susiya settlement has been granted a generous planning scheme that allows for the future development of housing and infrastructure. While the outpost was established without permission and in contravention of Israeli law, it has been connected to water and electricity networks. Due to systematic settler violence and intimidation, Susiya village residents have limited or no access to about two-thirds of the community’s farming and grazing area.

[2] Two of the structures in Qalandiya village were in Area C and the others were within municipal Jerusalem.