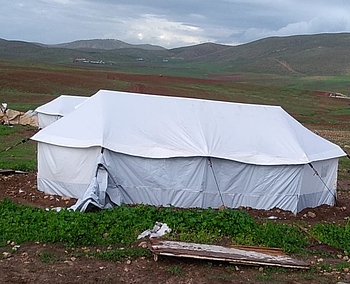 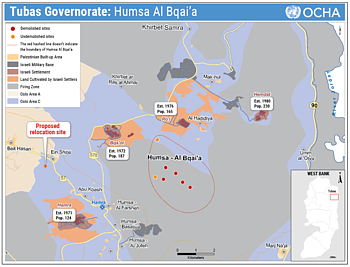 The Palestinian Bedouin community of Humsa - Al Bqai’a, is located in Area C in the northern Jordan Valley, mostly in an area designated as a ‘firing zone’ for Israeli military training, where Palestinian residency or access is prohibited.  The community has suffered from multiple large demolitions and confiscations in recent months, which have resulted in the displacement of over 60 people, including 35 children.  According to representatives, the community was informed by the ICA that they have been assigned to a relocation site near the village of Ein Shibli. The community has made appeals to the courts and rejected previous proposals to be moved to another location.

On 16 February, the Israeli Civil Administration confiscated five animal shelters, which the community was attempting to install in advance of a severe winter storm.  On the same day, an advocacy visit involving the diplomatic and humanitarian community took place, with the delegation accessing the site and meeting with community members.

Since the most recent round of demolitions began on 1 February 2021, humanitarian partners have distributed emergency shelters, food and essential household items, much of which has been confiscated or damaged by Israeli forces. The ongoing demolitions are taking place in the midst of the COVID-19 pandemic and the lack of adequate shelter is impeding the necessity for social distancing and other recommended safety measures.