Humanitarian snapshot: casualties in the context of demonstrations and hostilities in Gaza | 30 March - 31 December 2018

Since 30 March 2018, the Gaza Strip has witnessed a significant increase in Palestinian casualties in the context of mass demonstrations and other activities along Israel’s perimeter fence with Gaza, taking place as part of the «Great March of Return» (GMR), as well as during hostilities and access related incidents. The large number of casualties among unarmed Palestinian demonstrators, including a high percentage of demonstrators hit by live ammunition, has raised concerns about excessive use of force by Israeli troops. Exposure of children to violence and lack of protection for medical teams are also of concern. Despite significant assistance provided, addressing the resulting multi-sectoral needs of the mass influx of casualties remains challenging due to the lack of funds, years of blockade, the internal divide and a chronic energy crisis. 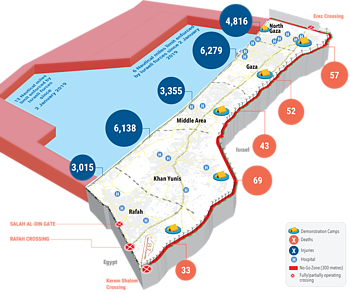 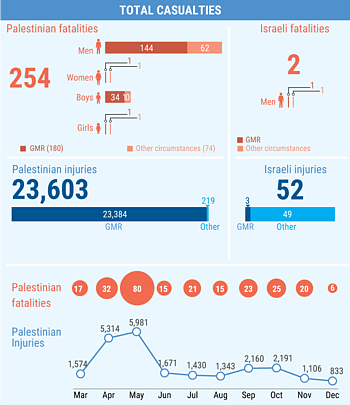 Disclaimer: Data and analysis provided in this snapshot is based on preliminary information available.