Gaza two years on: the psychosocial impact on children

Published as part of
The Monthly Humanitarian Bulletin | August 2016

After the 2014 conflict, the UNICEF-led Child Protection Working Group led a rapid assessment in the Gaza Strip in which 100 per cent of respondents confirmed that there had been changes in children’s behaviour as a result of the psychological distress they had suffered from the conflict. The most common changes included bedwetting, unusual crying/screaming and displays of aggressive behaviour, particularly in boys. Two years on, the consequences of the conflict are still being felt and continue to take a heavy toll on children and their well-being, including their mental health.

Eighty-eight per cent of respondents noted that children had engaged in acts of violence, including bullying, violence towards siblings and vandalism to infrastructure. The attitudes of carers were also found to have changed since the conflict and 54 per cent of respondents reported increased aggression (including physical and verbal abuse) towards children.

In September 2014, UNICEF estimated that the conflict had left 373,000 Palestinian children in need of direct psychosocial support, based on the number of children affected by grave violations such as injury, killing or injury of a relative or other people, enduring airstrikes and shelling, and displacement.

By the end of 2015, the Child Protection Working Group and the Mental Health and Psychosocial Working Group (MHPSS) had reached 147,908 children – 40 per cent of all children originally identified as in need of support. Some youth were provided with support through centres that provide families with holistic protection services, and where counsellors organize life skills sessions and case managers can attend to children’s specific needs.

To date, it is estimated that one in four children in Gaza still require psychosocial support (225 000 children) and 33 000 need specific case management.[1] In the first six months of 2016, members of the MHPSS Working Group in Gaza reached 63,008 children with psychosocial support and counselling services, while members of the UNICEF-led Child Protection Working Group were able to reach out to 1,542 children (44 per cent girls) through case management.

As part of preparation for a new escalation of violence, and building on lessons learned from 2014-2015, Child Protection Working Group members have worked closely with the Protection Cluster, the Gender-Based Violence Working Group and other actors, to develop standard operating procedures and to review emergency contingency plans. These will be used for capacity building purposes, to guide the work of protection teams that will operate in government-run designated emergency shelters.

At the same time, as part of a joint strategy to link humanitarian and development programming, significant efforts are being made to strengthen child protection systems for the benefit of the most vulnerable children and families in Gaza. 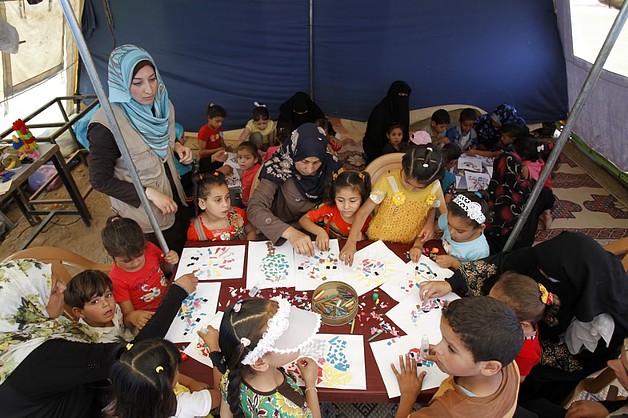 In Gaza city, eight-year-old Iman[2] was suffering from distress-related symptoms, including a fear of sudden loud noises and planes, frequent nightmares about events related to the conflict and bedwetting. She was referred to a Palestinian Centre for Democracy and Human Rights (PCDCR) counsellor who developed a comprehensive intervention plan to provide her with appropriate psychological support through expressive arts, relaxation techniques, positive stimulus family counselling sessions and individual counselling. As a result, Iman managed to overcome the memories and distress caused by the conflict. Her learning achievements improved, she became more sociable and was able to express her feelings freely with her family and peers.

* This article was contributed by UNICEF

[2] True name has been changed.