Published as part of
The Monthly Humanitarian Bulletin | January 2015

The summer hostilities resulted in one of the largest waves of internal displacement in the Gaza Strip, with approximately 100,000 people still displaced. The ability of humanitarian actors to respond to emerging needs has been hampered by major gaps in the registration and profiling of IDPs (internally displaced persons). These activities are critical to establishing the location of IDPs, and subsequently their living conditions, vulnerabilities and specific needs, as well as to assess the impact on host communities.

Over the course of the war, UNRWA and the Ministry of Social Affairs (MoSA) in Gaza conducted an initial registration of IDPs. However, these records became outdated following the entry into force of the ceasefire on 26 August, when the majority of IDPs simultaneously abandoned shelters and host homes without the opportunity to conduct an organized deregistration.

At present, only some 10,500 IDPs hosted in 15 UNRWA Collective Centres, and approximately 1,400 taking shelter in pre-fabricated housing units, are properly registered. Information regarding the remaining IDP population (some 88,000), including those residing in makeshift shelters, with host families, and in rental accommodation, is partial and decentralized.

Various humanitarian partners, including UNRWA, the Norwegian Refugee Council (NRC), MoSA and OCHA, have taken initial steps to address this gap, including the formation of an IDP Information Management Working Group. Once operational, the group is expected to identify gaps, share data and develop a suitable tracking mechanism for all IDPs across the Gaza Strip.

In October 2014, the NRC, in cooperation with Khuza’a municipality (Khan Younis), piloted a self-profiling project involving IDPs reporting about their whereabouts, shelter situation and key vulnerabilities. As a result, there is now basic information enabling this municipality and humanitarian actors to carry out protection activities, improve access to services and prioritize service delivery on the basis of vulnerability in this community. The project was subsequently expanded to Al Shouka, Wadi Gaza, Jabalia, Beit Lahya and Um Nasser municipalities. The continuation and further expansion of the project is subject to additional funding.

The damage assessment of homes conducted by UNRWA for refugee families, and by UNDP and the Ministry of Public Work and Housing (MoPWH) for non-refugee families, enabled shelter actors to identify those eligible for shelter assistance, but did not systematically track their current location or needs.

By the end of 2014, damage assessments of over 63,000 individuals (11,232 families) whose homes were totally destroyed or severely damaged and rendered uninhabitable had been completed and validated. However, the Shelter Cluster estimates that the total number of households that had their homes destroyed or severely damaged is as high as 18,000. By early February 2015, UNRWA alone had received around 44,000 appeals to the initial assessments, triggering the resumption of the assessment process.

As of 11 February 2015, approximately 84 per cent of the IDP families whose damage assessment was complete (9,422 families) had received transitional shelter cash assistance (TSCA) from UNRWA or UNDP, covering part of the period since their displacement.

Critical funding gaps remain, hampering the ability of agencies to assist those displaced. On 27 January, UNRWA was forced to suspend its self-help cash assistance programme. UNDP has also not been able to provide cash assistance to all displaced, non-refugee families due to severe shortcomings in funding, leaving some of the most vulnerable families in Gaza with little hope of rebuilding their lives.

General frustration about the slow pace of reconstruction and UNRWA’s suspension of its cash assistance programme triggered a number of protests across the Gaza Strip, one of which involved the forcible entry by protestors into a UN compound in Gaza City and minor damage to UN property. Following this incident, UN staff employed as monitors for the Gaza Reconstruction Mechanism (GRM) temporarily left Gaza, but returned on January 31 after the situation had stabilized.

In a statement on 7 February, the UN Secretary General encouraged donors to honour the pledges made at the October 2014 Cairo Conference and to disburse their financial commitments as soon as possible to prevent further deterioration in the humanitarian situation.

Israel announces a limited easing of the blockade

On 17 February the Israeli Ministry of Defense announced additional measures aimed at easing access and movement in and out of Gaza. These measures include approval to bring in 45 agricultural tractors, an increase in the monthly quota of merchant permits from 3,000 to 5,000, an increase in the number of merchants permitted to travel from Gaza to Israel from 400 to 800 per day, and an expansion of agricultural and industrial exports from Gaza to include textiles and furniture. A more detailed overview of the recent easing measures introduced by the Israeli authorities and their impact will be available in the February HB issue.

“This was our home“: the case of the Saudi family, eastern Gaza city

Displaced female-headed households are amongst the most vulnerable in Gaza. Other vulnerable groups include pregnant or lactating women, people with disabilities and chronic illnesses, children and the elderly. 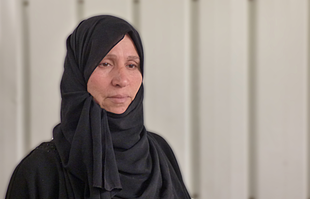 Fatma Mardi Saudi, 56, a widow and mother of eight, is from Ash Shuja’iyeh, one of the areas worst affected in the summer hostilities. Their family home was severely damaged and they have been displaced for more than six months.

More than five months after the ceasefire, Ash Shuja’iyeh has seen little progress in terms of recovery or reconstruction. Fatma and her three unmarried sons have been living in two pre-fabricated housing units provided by the Ministry of Public Works and Housing (MoPWH) for the past four months. Living conditions are crowded and extremely cold, so they spend most of their time outside. One of Fatma’s sons, Nour Din, 13, has Downs’ Syndrome and attends a special school. He is still searching through the rubble every day for his laptop, which he lost when their home was hit. Fatma is afraid that Nour will be exposed to explosive remnants of war (ERWs) as the area is still full of rubble from the hostilities.

Her late husband worked with the PA, so the family receives a monthly pension of 1,300 shekels. However, to build her home, Fatma took out a loan from the bank last year. Now, even though the house was severely damaged, Fatma still continues to pay off her debts, leaving her and her sons with very little.

During January’s storm, it was unbearable to stay in the pre-fabricated housing unit. f atma suffers from severe back pains and is badly in need of an operation. She and her children relocated temporarily to her mother’s house. “We really need materials to cover the outside area between the two rooms of the caravan, to keep the children safe and offer a little privacy. The situation here is very, very difficult.”

Two of Fatma’s brothers are living in the severely damaged family home. Since the Saudi family are non-refugees, the damage assessment was carried out by UNDP and MoPWH. “They told us to evacuate the home as it is uninhabitable and potentially dangerous, but we have nowhere else to go and no money to rent so what can we do?” her brother Abdallah said.

Each of Fatma’s brothers received a total of $1,700 from UNDP. Abdallah and his family were renting an apartment from October 2014, but after three months, they were forced to go back to their severely damaged home because they did not have any money to continue to pay rent. The two brothers are trying to manage as best they can by carrying out small repairs to the old home using materials they find in the rubble. They collect wood they find in the area and in the evening, make a small fire to try to keep warm.

Fatma points to the skeleton of a building 50 metres away: “That was our home,” she says quietly.