According to the health authorities in Gaza, up to 17:00 on 13 May, 83 Palestinians have been killed, including 17 children and seven women, and 487 people have been wounded since the start of the escalation on 10 May. According to Israeli officials, Israeli forces have targeted senior members of Palestinian armed groups, with some of the fatalities confirmed by the groups themselves.

According to the Government Media Office in Gaza, extensive damage is reported to civilian properties located in densely populated areas all over Gaza, with over 500 housing units destroyed or severely damaged, and minor damage to at least 2,100 housing units. The Government Information Office in Gaza also reported that 14 residential towers and houses have been destroyed, and that 23 schools and some primary health-care clinics were severely or partially damaged by heavy shelling. The Israeli authorities say that they have targeted over 650 sites reportedly related to the armed groups, including tunnels, weapons depots, as well as police, security and Interior Ministry and banking facilities. 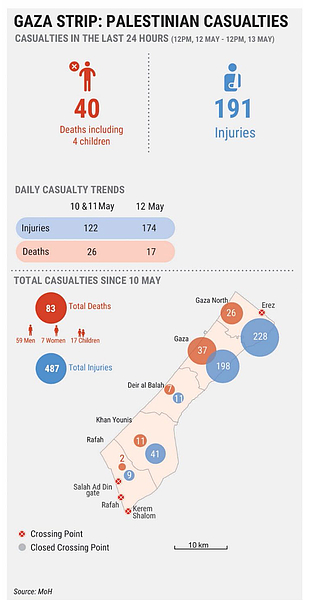 The North Gaza Seawater Desalination Plant is still not operational for the third successive day and affecting about 250,000 people. 150,000 people from Gaza City have limited access to piped water due to increasing power cuts. Due to the lack of fuel, Gaza’s sole power plant continues to run on only two of its four turbines, resulting in rolling daily power cuts of 8-12 hours.

The current insecurity significantly restricts the delivery of essential services, including the ongoing COVID-19 response, with the number of tests conducted drastically reduced and people unable to access treatment and vaccination facilities safely.

The Israeli authorities have closed the Erez crossing since 10 May, including for humanitarian and aid workers, and the Kerem Shalom goods crossing. All fishing activity remains prohibited off the Gaza coast. The Rafah crossing and Salah Ad Din gate with Egypt are closed due to the Muslim holiday of Eid al Fitr.

According to the Israeli authorities, Palestinian armed groups in Gaza have fired over 1,500 rockets and mortar shells into Israel since 10 May, with a significant number landing short inside Gaza, suggesting that some of the casualties and damage in Gaza may have resulted from Palestinian fire. In Israel, Palestinian rocket fire killed six civilians, including three women, a girl and a boy; hundreds have been injured. An Israeli soldier was killed on 12 May near the Gaza perimeter fence by an anti-tank missile fired from Gaza. 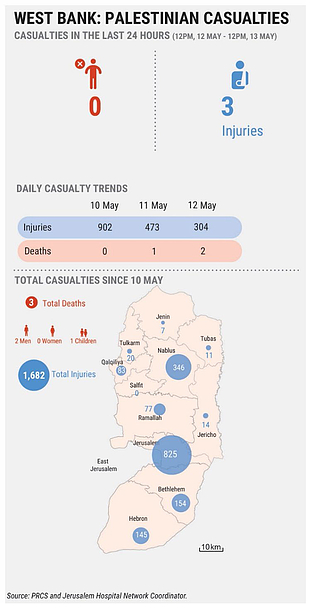 Clashes between Palestinians and Israeli forces have also continued across the West Bank. In East Jerusalem, clashes took place in the Mount of Olives, Al Issawiya, Jabal al Mukkabir and the Damascus Gate area of the Old City, among other areas. Palestinians also continue to protest in Sheikh Jarrah in solidarity with the families facing eviction, with Israeli forces using tear gas, stun grenades and ‘skunk’ water against Palestinians.

Elsewhere in the West Bank, clashes between Palestinians and Israeli forces were reported in the Hebron Bethlehem, Qalqiliya and Nablus governorates in the evening of 12 May. Attacks and stone-throwing by Israeli settlers also continue across the different locations of the West Bank and East Jerusalem. One Palestinian was killed and another was shot and injured when trying to attack Israeli soldiers, with two soldiers injured in one attack. In total, since 10 May, three Palestinians have been killed and 1,682 injured in the West Bank.

Civil disturbances have also continued within Israel, resulting in one fatality, multiple injuries and extensive property damage. The authorities have deployed the Border Police to contain the inter-communal violence and a night curfew was imposed on the flashpoint mixed city of Lod, overnight.  Some 374 people were reported arrested following widespread violence on 12 May.

In his most recent  briefing to the Security Council on 12 May, the UN Special Coordinator Tor Wennesland stated that “Hamas and other militants’ indiscriminate launching of rockets and mortars from highly populated civilian neighbourhoods into civilian population centres in Israel violates international humanitarian law, is unacceptable and has to stop immediately. While recognizing Israel’s legitimate security concerns, Israeli authorities must also abide by their responsibilities under international law and Israeli security forces must exercise maximum restraint and calibrate its use of force to spare civilians and civilian objects in the conduct of military operations.

“There can be no justification for the killing of civilians anywhere. I am particularly appalled that children continue to be victims of violence. I reiterate that children should not be the target of violence or put in harm’s way. They should be afforded special protection from any form of violence.”

Gaza: The Cluster continues assessing the escalation’s impact on vulnerable groups and foresees the need for expanded mental health services. All governmental institutions remain closed, including the safe shelter facility, the Al Rabei juvenile centre, and the women’s detention facility. UNMAS continues to inform people of the risks associated with explosive remnant of war (ERW) to reduce secondary injuries when they clear debris. Partners have observed an increased need for MHPSS and health services. Many people reportedly experience fear and panic.

Gaza: The Ministry of Social Development has shared a list of 500 displaced families and of 500 additional families who were otherwise affected and now need bedding kits and rent allowances. Shelter partners are supporting Internally Displaced Person (IDP) families with non-food items and cash support.

Gaza: The North Gaza Seawater Desalination Plant has stopped operating due to the risk to workers and a damaged electrical supply line, affecting the access of about 250,000 people to drinking water. 160,000 people from Gaza City population has limited access to piped water due to increasing power cuts. The shortage of electricity still affects Gaza WASH facilities, including water wells and reservoirs and wastewater treatment plants. Water pipelines were damaged in the Gaza city, Tall Al Hawa, and Muntar areas, and service providers are repairing the damage, but more staff, maintenance materials and tools are required. Operators still cannot access some WASH facilities safely.

West Bank, including East Jerusalem: Schools in the West Bank, including East Jerusalem, are closed for the Muslim holiday of Eid al Fitr from 11 to 15 May. Should the situation further escalate, they may not re-open. In the coming days, Cluster partners will scale up their mental health and psycho-social support (MPHSS) and the monitoring of education-related violations.

Gaza: Eight schools and one higher education facility have been affected so far. Partners are scaling up distance learning support, remote MHPSS, the delivery of emergency education supplies to children who lost their homes, and will start resource mobilization to rehabilitate damaged education facilities.

Gaza: The World Food Programme (WFP) is monitoring the prices and availability of goods in the markets. The stock of basic food commodities is reportedly sufficient for two months, but the closure of Kerem Shalom may lead to a decrease of fodder in the local market, as there are stockpiles for only one week. Markets and shops are closed, and various shops were reportedly damaged, including some contracted for WFP e-vouchers. The Ministry of Social Development has shared a list of 500 displaced families and of 500 additional families who were otherwise affected and now need food baskets and cash subsidies. WFP is ready to provide 160,000 affected families with one-time voucher and support IDPs with in-kind food assistance parcels.