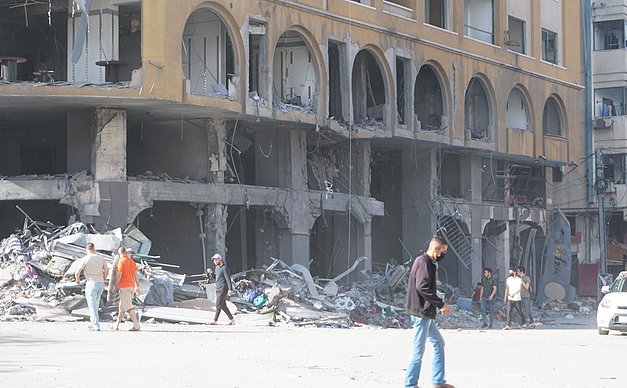 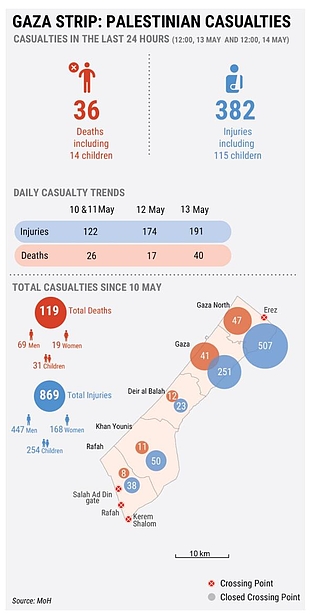 According to the health authorities in Gaza, up to 12:00 on 14 May, 119 Palestinians have been killed, including 31 children and 19 women, and a further 869 people have been wounded since the start of the escalation on 10 May. The Israeli authorities, report that some of the casualties in Gaza are likely to have resulted from Palestinian rockets falling short within Gaza territory.

From 20:00 on 13 May, and continuing throughout the night, Israeli forces launched concerted intensive air and ground strikes on multiple locations in the western and northern Gaza Strip, reportedly targeting the tunnel network of armed groups.  This has resulted in multiple deaths and injuries, caused extensive damage to building and infrastructure and led to considerable displacement of people fleeing in fear of the strikes.  UNRWA reports, that an estimated 6,600 displaced people sought emergency shelter in 18 of their schools in Gaza City with a further 3,000 fleeing to 11 UNRWA schools in northern Gaza. The schools are currently being used for protection purposes only and not yet enabled to provide formal service provision.  In the south of Gaza additional displaced families have taken shelter in UNRWA schools in Rafah.

The electricity feeder line in Jabalia has been severely disrupted, increasing the number of lines that are currently out of service to four out of 12, which brings the deficit of the supply from Israel to 45 per cent. With no incoming fuel expected in coming days, the availability of electricity will decrease and Gaza’s sole power plant continues to run on only two of its four turbines.  Power supply across Gaza has been reduced to an average of 8-10 hours per day, disrupting the provision of basic services, including water, sanitation and health care.

As of midnight 13 May, 209 families, comprising 1,020 people have sustained damage to their homes. Of these, 68 have been destroyed, 88 were so severely damaged that they are uninhabitable and 53 suffered major damage. The Education Cluster reports that 35 education facilities, including schools, a vocational training centre and higher education facilities have been affected since the start of the escalation, including 24 in the current reporting period. 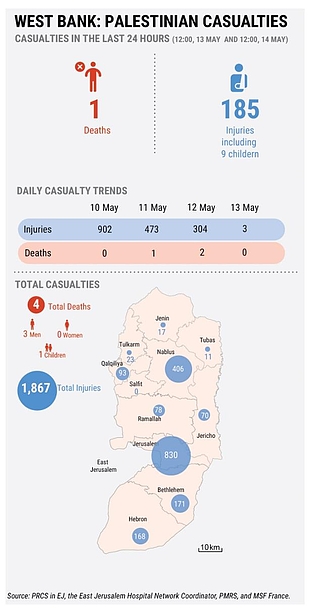 WASH Infrastructure has also been severely affected, including wastewater networks, pipelines, water wells and a wastewater pumping station; some repairs are underway but this is highly challenging given the heightened security risks. The North Gaza Seawater Desalination Plant is not operational for the fourth successive day, undermining access of about 250,000 people to drinking water.  About 230,000 people from Gaza city and Khan Younis have limited access to piped water due to increasing power cuts and damage to the networks. Wastewater leaks in the streets are reported in Beit Lahia, Gaza city and Khan Younis.

According to the Government Media Office in Gaza, 14 residential towers and houses have been destroyed. These structures housed 23 media agencies, as well as other offices.  Some 58 government installations have been bombed, the majority police and security headquarters and service facilities, including the police headquarters and the Police Rabat College in Gaza City.

The Israeli authorities have closed the Erez crossing since 10 May, including for humanitarian aid and personnel, and the Kerem Shalom goods crossing, including for fuel. All fishing activity remains prohibited off the Gaza coast. The Rafah crossing and Salah Ad Din gate with Egypt are closed due to the Muslim holiday of Eid al Fitr. 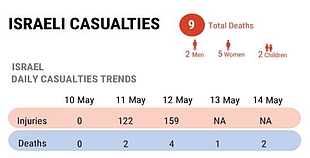 From late evening 13 May, and into the next morning, armed groups in Gaza also intensified barrages of rockets into Israel, affecting Ashkelon and Ashdod, necessitating local residents to remain in shelters. According to Israeli sources, since 10 May up until 12:00 on 14 May, Palestinian groups have fired over 2,000 rockets and other projectiles towards Israel, directly killing seven people, including two children, injuring hundreds and causing extensive damage. Two women were also fatality injured from falling while seeking shelter from incoming rockets.

Although the West Bank, including East Jerusalem, has witnessed relative calm during much of 13 May, the first day of the Eid al Fitr celebration, later in the evening and overnight, Palestinians resumed demonstrations in multiple locations to protest the ongoing hostilities in Gaza, leading to clashes with Israeli Security Forces.  On 14 May, Israeli forces shot and killed a Palestinian who, allegedly tried to stab one of the Israeli soldiers near Ofra settlement in northwest Ramallah.  Some 185 Palestinian injuries were recorded during the reporting period.  Palestinians also continue to protest in Sheikh Jarrah in solidarity with the families facing eviction.

In his most recent  briefing to the Security Council on 12 May, the UN Special Coordinator Tor Wennesland stated that “Hamas and other militants’ indiscriminate launching of rockets and mortars from highly populated civilian neighbourhoods into civilian population centres in Israel violates international humanitarian law, is unacceptable and has to stop immediately. While recognizing Israel’s legitimate security concerns, Israeli authorities must also abide by their responsibilities under international law and Israeli security forces must exercise maximum restraint and calibrate its use of force to spare civilians and civilian objects in the conduct of military operations.

“There can be no justification for the killing of civilians anywhere. I am particularly appalled that children continue to be victims of violence. I reiterate that children should not be the target of violence or put in harm’s way. They should be afforded special protection from any form of violence.”

West Bank, including East Jerusalem: Cluster partners are monitoring and documenting suspected violations and providing legal aid and child protection services as well as mental health and psycho-social support (MHPSS). Of ongoing concern is the use of live ammunition by Israeli forces during clashes with Palestinians and a reported a growing number of settler attacks in multiple part of the West Bank.

Gaza: The Cluster continues assessing the escalation’s impact on vulnerable groups and foresees the need for expanded mental health services. All governmental institutions remain closed, including the safe shelter facility, the Al Rabei juvenile centre, and the women’s detention facility. UNMAS continues to inform people of the risks associated with explosive remnant of war (ERW) to reduce secondary injuries when they clear debris. Partners have observed an increased need for MHPSS and health services. Many people reportedly experience fear and panic, especially children, and partners are providing online information and raise awareness among parents and caregivers on handling stress and caring for children during emergency.

Gaza: According to the Ministry of Public Works and Housing, the escalation has resulted in 32 buildings destroyed, comprising 285 housing units and 31 commercial facilities, in addition to 154 housing units with severe damage, and rendered uninhabitable, 97 with major damage and 3,549 with minor damage. Some 9,000-10,000 people are currently seeking shelter in UNRWA schools which were not designated as emergency shelters, thus no services are available. The Ministry of Social Development has previously shared a list of 1,000 displaced families who needs bedding kits and rent allowances. Shelter partners are supporting IDP families with non-food items and cash.

Gaza: The destruction of An Na’jeh water well and water transmission pipelines in North Gaza has disrupted the access to water for about 50,000 people in the area. Other water wells in the area were also reportedly damaged. Water and sewage networks were also damaged in Beit Lahia, disrupting operations, and resulting in loss of water and leakages of wastewater, affecting at least 65,000 people. Further damage with consequent leakage of wastewater was reported in Gaza city and Khan Younis. The service provider is trying to repair the lines.

The North Gaza Seawater Desalination Plant has stopped operating due to the risk to workers and a damaged electrical supply line, affecting the access of about 250,000 people to drinking water. About 230,000 people from Gaza city and Khan Younis have limited access to piped water due to increasing power cuts and damage to the networks. The shortage of electricity still affects all Gaza WASH facilities, including water wells and reservoirs and wastewater treatment plants. The municipality of Gaza issued an urgent appeal for the continuation of basic services, including solid waste management and maintenance of damaged water and sanitation facilities and networks. Operators still cannot access some WASH facilities for security reasons.

West Bank, including East Jerusalem: Schools in the West Bank, including East Jerusalem, are closed for the Muslim holiday of Eid al Fitr from 11 to 15 May. Should the situation further escalate, they may not re-open. In the coming days, Cluster partners will scale up their mental health and psycho-social support (MPHSS) and the monitoring of education-related violations.

Gaza: Some 35 education facilities and a ministry directorate building have been affected so far, including the UNRWA Vocational Education Centre and the premises of the Islamic University. Reports indicate that a number of these schools were directly hit by airstrikes or tank shells. Partners are scaling up distance learning support, remote MHPSS interventions, the delivery of emergency education supplies to displaced children, and will mobilize resources to rehabilitate damaged education facilities.

The World Food Programme (WFP) is monitoring the prices and availability of goods in the markets. All bakeries are reported to be working normally, with fuel and wheat flour available, but with low product consumption. Mills have stock of wheat grain for a month. Basic food commodities are also available for at least two to three months. The Ministry of Social Development has shared a list of 1,000 displaced families who need food assistance. WFP is ready to provide 160,000 families with one-time voucher and to support IDPs with in-kind food assistance parcels.