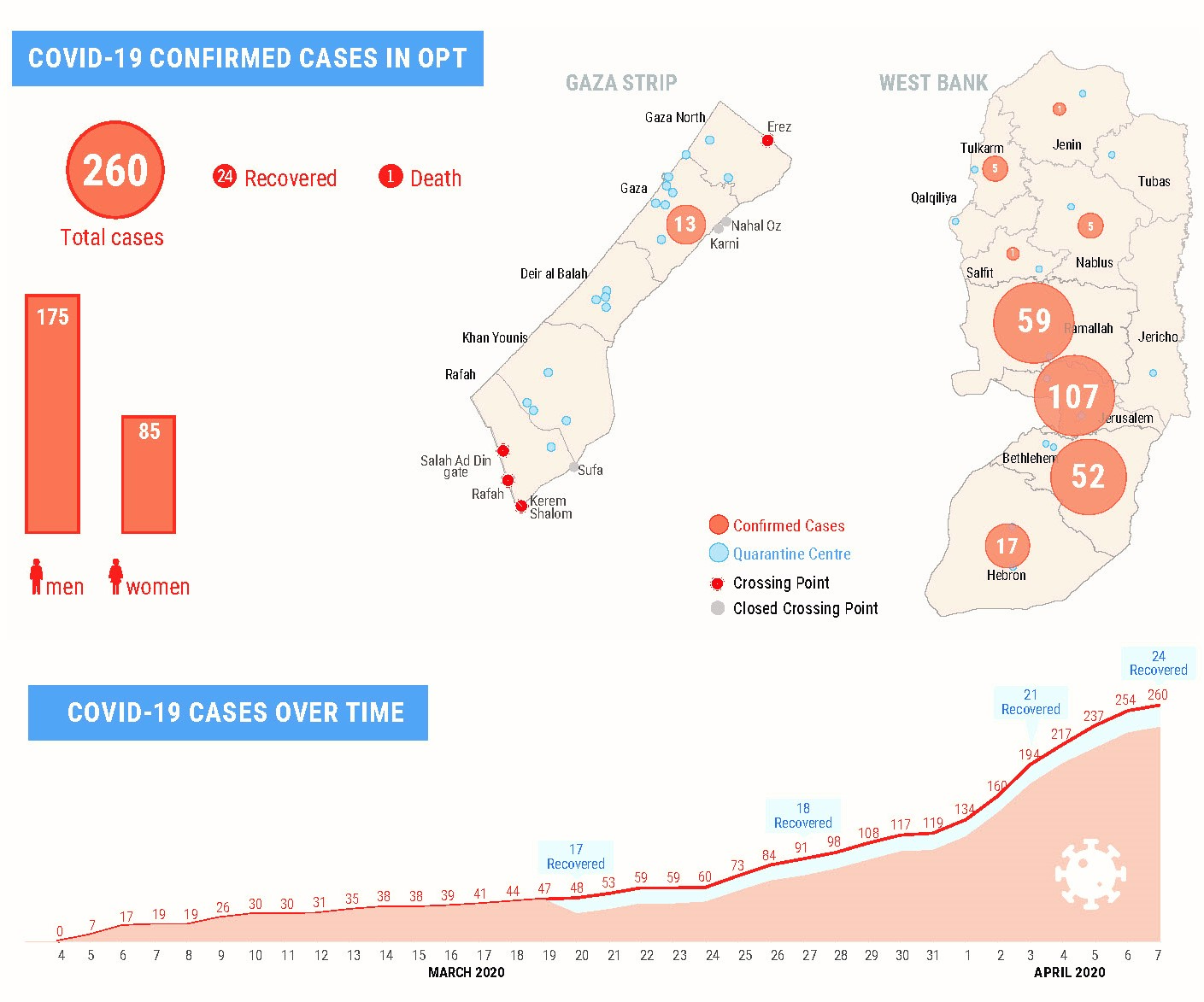 As of 7 April, a total of 260 Palestinians have been confirmed to have COVID-19 in the oPt, 247 in the West Bank (excluding East Jerusalem Palestinians), and 13 in the Gaza Strip. Of these, one died on 25 March, 23 people have recovered, and the majority of the remainder are asymptomatic. While the current number of people detected positive for COVID-19 in the oPt, especially in Gaza, remains low relative to other countries, this may reflect the limited testing capacity.

During the reporting period, over 100 new COVID-19 cases were detected in the West Bank, many of them reportedly contracting the disease in a factory located in a settlement industrial area in East Jerusalem. The exact number of cases in East Jerusalem remains unconfirmed, as these are not covered by the Palestinian Ministry of Health (MoH) and are not disaggregated in the overall figures by the Israeli authorities.

On 3 April, the Government of Palestine (GoP) extended the State of Emergency declared on 5 March across the oPt for another month. The Emergency Command Centre at the Prime Minister’s Office continued leading the efforts to contain the outbreak, amid close coordination with the Israeli authorities and international actors, primarily the World Health Organization (WHO). Nevertheless, the capacity of the Palestinian health system to cope with the expected increase in caseload remains severely impaired by longstanding challenges and critical shortages, particularly in the Gaza Strip.

In its Response Plan released on 26 March, the GoP requested US$137 million to support its direct public health response to COVID-19 across the oPt, as well as budget support and economic recovery. The health response component ($120 million) covers short-term critical gaps that could undermine its ability to contain and manage the epidemic.

The most needed items are currently in short supply due to the unprecedented global demand, including personal protective equipment (PPE) kits and supplies to conduct COVID-19 tests. Hospitals across the oPt also face shortages of specialized staff in intensive care units.

Across the oPt, and especially in Gaza, mental health and psychosocial service (MHPSS) providers have reported a sharp increase in phone consultations related to domestic violence, attributed to the longstanding closure of schools, increased unemployment and severe movement restrictions.

Movement restrictions and social distancing measures, previously imposed by the GoP, have been further tightened since the extension State of Emergency. Currently, there are over 30 quarantine and medical facilities across the West Bank where people who have COVID-19 are hosted, with preparations underway to open more centres. The authorities have reported an acute shortage of medical equipment and supplies, including testing kits, as well as trained personnel.

Concerns have been raised regarding the possible return of thousands of Palestinian workers employed in Israel, in advance of the Jewish Passover holiday, which starts on the evening of 8 April. This is because of a potential spread of the virus from Israel, as well as due to the limited capacity of medical and quarantine facilities in the West Bank. Arrangements have been made by the Palestinian authorities to test the temperature of returning workers, provide them with disinfectants and encourage them to undergo a 14-day home quarantine Nonetheless, according to the Israeli authorities, the work permits of over 36,000 Palestinians will remain valid during Passover and joint cooperation efforts between the two parties continue to address the issue.

A rapid community assessment conducted by the Shelter Cluster in mid-March found that of 165 vulnerable communities surveyed in Area C, more than half (3,500 households) were not yet supported by COVID-19 response or protection assistance, and lacked the financial and logistic capacities to purchase the required hygiene and protection materials.

The access of patients from the remainder of the West Bank referred to hospitals in East Jerusalem and Israel remained limited to emergency cases and cancer patients. The East Jerusalem Hospital Network has announced that all of their six facilities are preparing to deal with cases of COVID-19 that require clinical care, whilst continuing to suffer from chronic underfunding, which hinders the provision of medical drugs and treatment.

Pre-existing protection concerns related to Israel’s occupation have been exacerbated during the reporting period in the context of the COVID-19 crisis. In Area C and East Jerusalem, while the Israeli authorities have largely frozen the demolition of inhabited homes, the demolition and seizure of livelihood and service-related structures continued, adding strain to already vulnerable communities. Additionally, since the start of the crisis there has been a surge in attacks by Israeli settlers resulting in Palestinian injuries and extensive property damage. Concerns about excessive use of force by Israeli soldiers remain, with several incidents since the start of the crisis ending in the killing and serious injury of Palestinians.

As of 6 April, only 1,495 people have been tested for COVID-19 in Gaza. Much of this testing has been conducted in the West Bank or in Israel due to lack of capacity in Gaza, and the health authorities there have urgently appealed for more support to procure testing kits. Less than 1,100 people are currently quarantined in 25 designated sites, including the Rafah Crossing quarantine centre, health facilities, schools and hotels. The majority of these are expected to be released in the coming week, on the conclusion of their 21-day mandatory quarantine period. All non-emergency surgeries have been suspended and primary healthcare is restricted to 14 centres, which provide essential services only.
Access for Palestinians from Gaza to the outside world through the two passenger crossings with Israel and Egypt remains severely constrained. The Israeli-controlled Erez crossing has been largely shut down since 12 March for most permit holders and will function on a further reduced scale for the upcoming Passover holiday. As in the West Bank, the exit of patients has been limited to emergency cases and cancer patients. Exit to Egypt via the Rafah crossing has been halted by the Egyptian authorities, as of 15 March; and opening times for entry into Gaza remain irregular and unpredictable. An estimated 400 Palestinians from Gaza are currently waiting in Egypt to return.
The movement of goods from Israel and Egypt has continued as previously, including the entry of restricted (“dual use”) items via the Israeli-controlled Kerem Shalom Crossing. The latter is expected to continue operating over the Passover holiday at a reduced capacity. The Government of Israel has offered to expedite approvals for items needed in relation to the COVID-19 response

A number of significant financial contributions to the oPt Inter-agency Response Plan for COVID-19 were announced during the reporting period. Some of these contributions entailed the reprogramming of funds previously allocated or pledged for other interventions, including nearly $7.76 million by the European Union (ECHO) and $5.16 million by the oPt Humanitarian Fund (HF). Other contributions are entirely new, including $9 million from Kuwait and $2.8 from Canada.

Overall, since its launch on 27 March, $29.3 million have been raised for the implementation of the Inter-agency Response Plan, covering 86 per cent of the amount requested ($34 million).

The Plan intended to be rolled out over 90 days and, as needed, will be revised as the situation evolves. Its key objectives are to prevent further transmission of the virus in the oPt; provide adequate care for patients and their families; and mitigate the worst effects of the pandemic. It expands the initial plan launched on 14 March by the Health Cluster and is fully aligned with the GoP Response Plan. 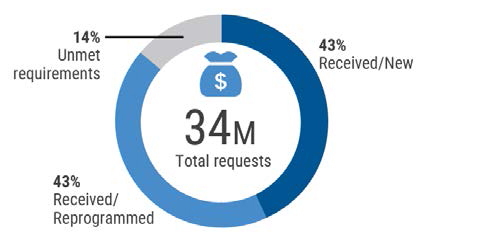 The Inter-agency Covid-19 Task Force led by the Humanitarian/Resident Coordinator (HC/RC), as well as Inter-Cluster Coordination Group (ICCG), continue regularly meetings to follow up on the implementation of the Inter-agency Response Plan. The HC/RC also informs the Palestinian authorities about essential movements required by humanitarian and development staff during this period of enhanced movement restrictions, while following the previously adopted Standard Operation Procedures. Where necessary, coordination with the Israeli authorities is also conducted to ensure the safe movement of staff.

As part of the Inter-agency Response Plan, UNICEF and WHO, with the support of the HCT’s Advocacy Working Group and UN Communications Group, are implementing a Risk Communication and Community Engagement (RCCE) plan. With the support of over 20 Health Cluster partners, NGOs and INGOs messages have been disseminated across various channels and via social media for the third week in a row, reaching tens of thousands of people and vulnerable communities across the oPt.

UNICEF are also taking the lead in coordinating and centralizing the procurement of medical supplies and equipment. Additionally, the World Food Programme (WFP) has set up a logistics working group to support humanitarian partners in providing key supply chains, reducing duplication and increasing cost efficiency. Logistics services will be provided by air and sea, through Ben-Gurion airport and Ashdod Port.

Strong cooperation efforts between the GoP and Israel in response COVID-19 continue. In this regard, Israeli authorities delivered to the West Bank and the Gaza Strip 2,850 testing kits, 2,000 gloves, 1,000 masks, 100 litres of sanitizer and 200 protective suits, as well as coordinated entry of 10,000 testing kits through Ben Gurion airport.

Priority needs and activities by cluster

The main objectives of the Health Cluster response are to stop further transmission of COVID-19 in the occupied Palestinian territory (oPt), mitigate its impact, and provide adequate care for patients affected.

The main objectives of the Protection Cluster response are to prevent and mitigate the impact of COVID-19 on new and existing protection concerns, and protection mainstreaming across the Plan.

The main objectives of the Education Cluster response are to map out and disseminate relevant Arabic materials on hygiene awareness and preventive measures related to COVID-19; use social media platforms to raise awareness of the importance of home-based learning; prepare and disseminate media messages to caregivers, teachers and children; and clean and disinfect all schools and public kindergartens prior to their re-opening. These objectives are aligned with the Ministry of Education’s (MoE) Response Plan to COVID-19.

The Shelter Cluster response seeks to improve vulnerable households’ capacities and resilience to reduce the spread of the pandemic, and to reduce overcrowding in shelters to mitigate its spread.

The WASH Cluster seeks to ensure continuous access to WASH services in Health Centres, key institutions and communities, to minimize the impact of the COVID-19.

As set out in the Inter-agency Response Plan, the main objective of the Food Security Cluster is to support households whose food insecurity is directly affected by the virus outbreak with in-kind and cash assistance, including e-vouchers; and to adopt a new door-to-door delivery modality in Gaza.

For priority needs and activities by cluster, see the full report.