Published as part of
The Monthly Humanitarian Bulletin | August 2015

Impact particularly severe on health and water and sanitation services

Throughout July, several incidents underlined the severity of the electricity crisis in the Gaza Strip. On 1 July, the electricity supply to the southern governorate of Rafah, home to 220,000 people, came to an almost complete halt when all three Egyptian feeder lines supplying southern Gaza were disconnected, reportedly after sustaining damage due to military operations in Northern Sinai. The lines were repaired on 7 July, but frequent cuts and electricity fluctuations mean that the situation in Rafah remains precarious. On 20 July, two Israeli feeder lines supplying Gaza City and Khan Yunis were also disconnected. The lines were repaired on 22 July. Also on 20 July, due to a lack of fuel supply, Gaza’s sole Power Plant (GPP) was forced to shut down completely, triggering rolling power cuts of up to 18 hours a day throughout Gaza. Fuel supplies resumed on 29 July and partial operation has been restored. However, due to the high demand for electricity in summer and increased losses through the grid, power cuts are still longer than the usual 12 to 16 hours per day.

The current electricity deficit in Gaza began with an Israeli airstrike on the GPP in June 2006 and continues to severely disrupt the delivery of basic services, undermining already vulnerable livelihoods and living conditions. Gaza has three sources of electricity: the GPP, which has been operating at approximately half or less of its capacity (60 out of a potential 120 mega watts (MW); and electricity purchased from Israel (120 MW) and Egypt (28 MW), via 13 cross-border feeder lines. Combined, these are able to meet less than 45 per cent of the estimated 470 MW electricity demand. The power supply has been significantly impaired over recent years by various factors, including the lack of funding for fuel for the GPP; the impact of unrepaired damage caused by Israeli attacks on the GPP and power networks; the lack of upgrade to the network; and the recurring malfunctioning or breakdown of the Israeli and Egyptian feeder lines.

According to the Gaza Electricity Distribution Company (GEDCO) electricity demand can increase to over 500 MW during peak summer months. However, on many days during July, Gaza was only supplied with 100 -150 MW, 20-30 per cent of demand. As a result, rolling power cuts have increased from 12 to 20 hours per day throughout Gaza. Although the functioning of the 13 feeder lines is relatively sustainable, the operation of the GPP has been significantly impaired in recent years by a long-running disputes between the Palestinian authorities in Gaza and Ramallah over the funding of fuel; the limited collection rate of bills from consumers;[i] the destruction of fuel storage tanks by an Israel strike during the summer 2014 hostilities; and Israeli-imposed restrictions on the import of essential spare parts, equipment and basic construction materials.

Since July 2013, the energy crisis has deepened due to the lack of affordable fuel, resulting in the GPP operating at half of its capacity or shutting down completely. Between 2010 and 2013, both the GPP and basic service providers depended on cheap Egyptian fuel smuggled through tunnels under the Gaza- Egyptian border; this smuggling has completely ceased since July 2013 due to Egyptian security measures. Since then, the Energy Authority which is responsible for purchasing fuel for the GPP and service providers have faced substantial financial challenges in purchasing Israeli fuel, which is up to three times more costly than state-subsidized Egyptian fuel.

To maintain a minimum level of critical services, service providers rely heavily on back-up generators. However, similar to the GPP, the operation of generators is constantly at risk due to funding shortages, overuse of the generators and challenges in procuring additional generators and spare parts, which are classified as “dual-use” items by the Israeli authorities, and, as a result, are governed by a range of import restrictions. According to the WASH sector, the average capacity of generators for water and wastewater treatment installations is 110 KVA (1,000 volt amps) with a consumption rate of approximately 1,400 litres per month per generator at a rate of 13 hours of usage. The prolonged outages, compounded by challenges in the operation of back-up generators, have severely undermined the delivery of basic services in all sectors.

According to the health sector, fuel storage and generator capacity vary greatly between facilities. Several main hospitals often have fuel supplies for fewer than five days of operation. For example, Shifa Hospital has storage for 191,000 litres of fuel and consumes 615 litres per hour. On 30 July, 26,000 litres were in storage, sufficient for 2.64 days at the current consumption rate. Common coping mechanisms adopted by hospitals throughout Gaza include the postponement of non-urgent and elective surgeries; increasing referrals of patients outside of Gaza, particularly for chronic illnesses; discharging patients prematurely; and reduction and/or cancellation of complementary services, such as cleaning and catering. In addition, according to the World Health Organization (WHO), some 300 machines and medical equipment at hospitals have been damaged due to fluctuations in the current and are now out of order. 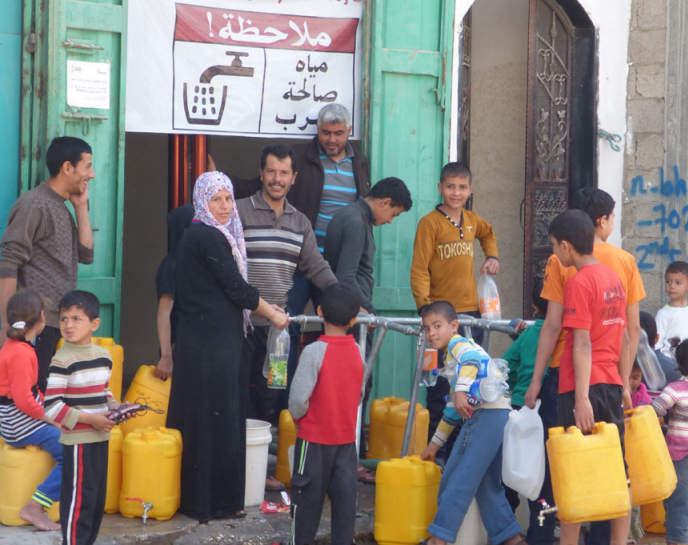 The insufficient supply of electricity and fuel to operate water pumps and wells has further reduced the availability of running water to most households. The average water consumption from the network has decreased from approximately 70 to 45 litres per person per day. This has increased reliance on private, uncontrolled water suppliers and lowered hygiene standards. Wastewater plants have also shortened treatment cycles, thus increasing the pollution level of partially-treated sewage discharged into the sea. There is a constant risk of back-flow of sewage onto streets. The shortage of fuel to run vehicles has also forced municipalities to significantly reduce refuse collections and exacerbated public health hazards.[ii]

Emergency fuel supplies funded by the international community and coordinated by UN OCHA have been ongoing since December 2013 to ensure the operation of vital health, WASH and municipal facilities. To date in 2015, an average of 480,000 litres per month is distributed across all sectors. Exceptional additional distributions are required if the GPP or any of the electricity lines cease to operate, and also when small-scale shocks occur. As a result of the shutdown of the GPP and the breakdown of the Egyptian and Israeli electricity lines in July 2015, around 130,000 litres of additional emergency fuel were released for WASH, health and solid waste sectors bringing the total amount of fuel distributed in July to 612,125 litres, around 25 per cent above the monthly average.

[i] Nearly 70 per cent of households do not pay their electricity bills due to poor finances or lack of enforcement.